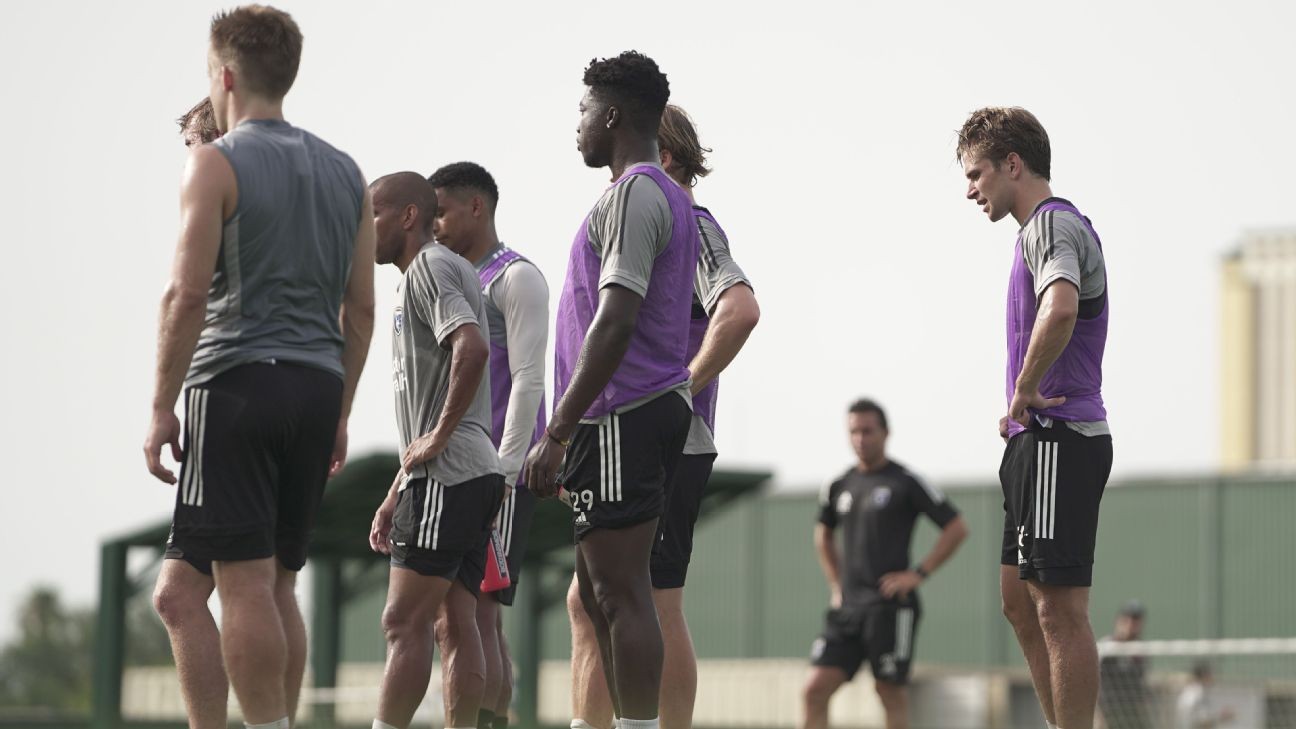 With reporting from Stefano Fusaro in Orlando, Fla.

There have been tweets about sketchy room service food, in-hotel wildlife and yes, some of the more comfortable surroundings at Walt Disney World's Swan and Dolphin Resort. And yet the pall of COVID-19 remains impossible to ignore as the league pushes towards the start of MLS Is Back Tournament on July 8. (Stream all matches LIVE on ESPN and ESPN Networks -- U.S. only)

MLS announced on Wednesday that six FC Dallas players have tested positive for COVID-19 since the team's arrival over the weekend. Later that day, sources confirmed to ESPN a report from The Athletic that three more FCD players, plus one of their coaches, had tested positive. This update came on top of another three positive tests prior to the team's departure from their home base in Texas.

Players had already been fretting in private about the setup before a single one of them had set foot in Orlando. It was only 10 days ago that players received documents from MLS outlining the arrangements at Walt Disney World and the protocols to be followed. The developments of the last 72 hours have done little to dampen the worries of those players and staff already here.

"We were already concerned coming into this bubble environment," one player in Orlando told ESPN early on Wednesday. "Now six positive tests within the first few days here? This just adds anxiety to an already tough situation."

MLS is Back: TV schedule, fixtures and how it works - everything you need to knowHow will MLS, U.S. Soccer, NWSL take action in push for equality?

For Minnesota United manager Adrian Heath, the positive tests have only added to the sense of discipline he's tried to convey to his players. The team has made it this far, and now is no time to let up.

"Before we train every day, we have a little chat with the boys," he told ESPN via telephone. "We know we're in different times, that this isn't normal. We've said to them, 'As much as you don't want to do it, you've got to keep the mask on. You've got to self-isolate; you've got to be on your own floor. Don't be walking around.' So, literally, we have not moved off the floor that we're on, other than getting on the team bus going into training, and coming back.

"I haven't spoken to another coach from another team. I have waved aloud to them and gone, 'How are you doing?' But there's no stopping and conversing. It's everybody's doing what they can to try and protect not only yourself, but your team and your players."

Yet around the league there is determination -- and, in some cases, resignation -- that the show must go on. As one team executive put it, "I don't see how the league can wind things back."

A steady stream of positive tests just might force them to, though the hope remains that it won't come to that.

San Jose were one of the first teams up and running in Orlando as MLS teams arrive in Central Florida ahead of a July 8 kickoff. FC Dallas via USA TODAY NETWORKFood for thought

The tweets started to appear on Tuesday morning, with Toronto FC defenders Omar Gonzalez and Eriq Zavaleta among those posting images of a rather run-of-the-mill lunch sandwich that looked straight off the set from "Worst Cooks in America," all with a listed price of $65. What ensued was almost a mini-war of words between the players and league that acted like a continuation of the CBA talks -- which included a league threat to lock the players out -- that concluded last month.

As it turned out, Gonzalez and Zavaleta were engaged in a bit of misdirection. Toronto isn't slated to fly down until Friday, but they were apparently willing to go to bat for some of their fellow players. The meals shown were only what players had to accept for the first 12-24 hours while they were isolated, following COVID-19 testing, yet the point was driven home all the same: the players were not going to hesitate to call the league out on what it deemed to be poor accommodations or preparation. The league then responded with an email informing media of all the different eating options available. As players began to explore the different eating options, the temperature cooled.

"It's a mixed bag," said one player. "The room service lunch is really bad, but overall the food has been alright."

"Every banquet-style meal has been solid," said another. "No different than the meals we would get on the road."

The San Jose Earthquakes have already benefited from one treat since arriving in Florida: a meal at Shula's Steakhouse paid for by manager Matias Almeyda.

Heath noticed that there is still an eerie feel about the place, and he would know better than most. He lived in the Orlando area for over six years when he was managing Orlando City, both before and after they moved to MLS.

"I know how busy this place has become," he said about the Orlando area and the team's accommodations. "But literally there's nobody about. I'd say it's quite surreal, really, because we're here and you do not see anybody."

All the better to make sure his team is focused. The Loons were among the teams for whom the league-wide shutdown came at an inopportune time, given that they recorded two impressive road wins over San Jose and the Portland Timbers to open the 2020 season back in March. But any talk of momentum has been obscured by the fact that when Minnesota takes on Sporting Kansas City on July 12, it will have been just over four months since the Loons' last match. And it wasn't until recently that Heath knew when his team would resume play.

"When you don't know when you start, I think is a real challenge for a coach and the sports science department and the fitness guys, because normally you go, 'Okay, we start on this date and we work backwards from that.' We didn't really know when we were going to get going again."

play0:52Henry: MLS is Back won't be like any other tournament

Montreal coach Thierry Henry explains the difficulties in preparing for the return of the MLS.

Now that his team is here, it's about adapting, and accepting, what the surroundings offer.

"We can make excuses if you want to, but that doesn't help us," Heath said. "We've just got to get on and train as hard as we can. Like we were training [Wednesday] morning, it must have been 95 degrees. You don't get used to training in those types of conditions and that weather. You just don't. Is it ideal? Sometimes you don't know, but this is where we are, guys."

In a bid to get closer to match fitness, Minnesota has scheduled a friendly against the Columbus Crew on Sunday. Heath will know more about where his team is at after that match.

"You think you're good, you think you're in a good spot," he said. "And then all the sudden you go, 'Oh, my god, we're a million miles away from it when you play 90 minutes.' So that will be the test."

The tournament is set to begin on July 8. It won't be known until then how many miles away some teams are.