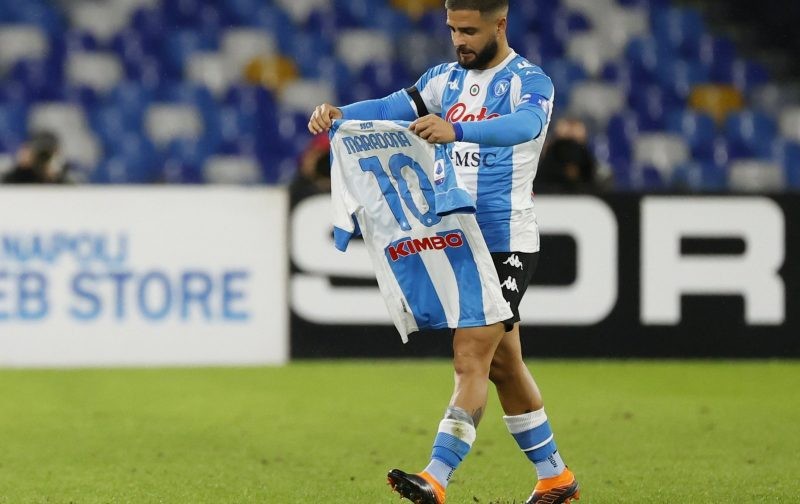 Lorenzo Insigne made the difference for Napoli as they secured a 4-0 victory against Roma on Sunday evening in their first Serie A match after the passing of Partenopei icon Diego Maradona at the age of 60.

The Ciucciarelli captain opened the scoring in the first half with a free-kick and Fabian Ruiz doubled the lead in the second half after the Neapolitan supplied the assist. Dries Mertens and substitute Matteo Politano wrapped up the scoring in the last 10 minutes.

A minute silence for Maradona was given before kick off, and Napoli wore a special fourth kit inspired by the national team uniform of Argentina, the country where ‘El Pibe de Oro’ was born and the team he represented at international level. There was also a picture of him on the screen at the stadium, and the television generated image displayed a farewell message saying “AD10S DIEGO” as well as “1960 to infinity”, to imply a sense of immortality.

It was a cagey opening to the match, with Pedro’s shot over going over the bar being the most noteworthy highlight before play was stopped to applaud Maradona in the 10th minute.

This pause galvanised Napoli, with Hirving Lozano posing a danger on the right-wing, while Insigne as well as Mertens had chances to score. It was Insigne that opened the scoring after 30 minutes and then celebrated by running to the touchline to lift up and kiss a jersey with Maradona’s name.

Mertens was fouled by Ibanez outside of the penalty area, and from the left side of the pitch, the Napoli captain curled a sumptuous free-kick into net which went in at the near post.

Roma briefly attacked but then Napoli kept searching for a second goal, with Lozano having a shot deflected off a Giallorossi defender. Before the end of first half, Lupi goalkeeper Antonio Mirante denied Mertens twice. Napoli continued in the same fashion in the second half and Lozano forced a save out of Mirante. Soon after though, Roma finally came out of their shell and started to attack.

Edin Dzeko was not able to hit the target with his chance, but when the Giallorossi seemed likely to equalise, the Neapolitans doubled their lead in the 64th minute.

After Lupi wing-back Leonardo Spinazzola lost the ball on Napoli’s right flank, the Partenopei passed their way up the pitch before Insigne made a surging run down the middle. His pass found Fabian Ruiz, whose left-foot shot from outside of the box wasn’t particularly powerful, but it was still able to beat Mirante at the near post. Mertens finally got his goal and Napoli’s third after Mirante failed to hold a shot from substitute Eljif Elmas, which allowed the Belgian international to thump in the rebound.

Napoli were keeping possession when Politano had the ball, and he barged through the Roma defence, then dribbled around Mirante to score the fourth.