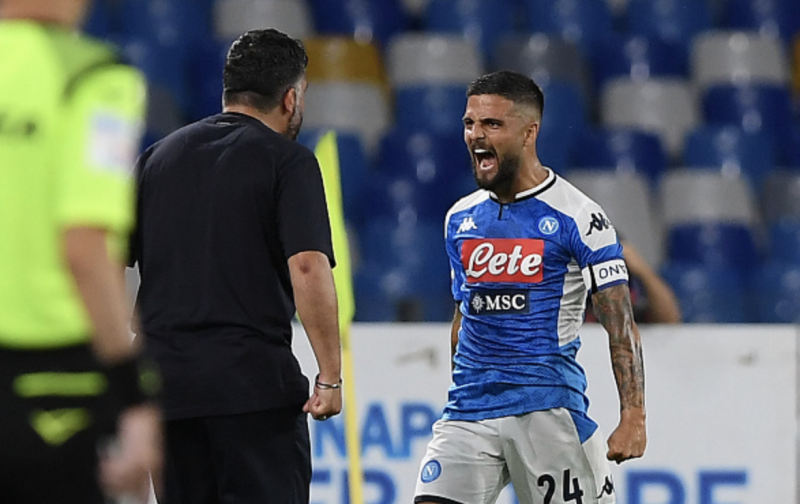 A spectacular winner from Lorenzo Insigne earned Napoli a 2-1 home victory over Roma in the Derby del Sole on Sunday to send them level on points with the capital club in the Serie A table.

Jose Callejon opened the scoring for the hosts in the second half, only for Henrikh Mkhitaryan to instantly reply, but a curling strike from Insigne settled the game with eight minutes remaining.

The result sees Napoli move into sixth place and join the visitors on 48 points in the table, although they remain behind the capital club on goal difference. Paulo Fonseca’s side put in an improved performance after their disastrous 2-0 defeat to Udinese on Thursday, but their losing run has now stretched to three consecutive games.

Gennaro Gattuso made four changes from the side that lost 2-0 to Atalanta in midweek, with Kostas Manolas, Alex Meret, Arkadiusz Milik and Callejon coming in.

Chris Smalling was the only survivor from the Roma side that was beaten by Udinese as Fonseca surprisingly opted for a three-man defence, while Nicolo Zaniolo was fit enough for a place on the bench seven months after rupturing his cruciate ligament. Giallorossi goalkeeper Pau Lopez was busy on his return from injury, beating away an angled Callejon strike before showing great anticipation to charge down Piotr Zielinski’s effort.

Lorenzo Pellegrini was in the mood on his return from suspension and had a dangerous-looking shot deflected wide, but there was bad news soon after when Smalling limped off the pitch with an injury to be replaced by Federico Fazio.

Napoli were inches away from taking the lead after 32 minutes when Milik’s bullet header cannoned off the bar and into the path of Callejon, who barely had time to react before the ball had rebounded off his head and sailed over an open goal. There were chances at both ends just before the break, as Lopez got down quickly to parry a low Milik shot before Pellegrini couldn’t divert Davide Zappacosta’s cut-back on target from 12 yards.

Napoli took a deserved lead 10 minutes into the second half with a fine team goal, as Callejon tapped in from an excellent Mario Rui cross after a long spell of possession by the hosts.

However, the visitors were level just five minutes later when Mkhitaryan advanced unchallenged from halfway to the edge of the area before firing a low finish into the bottom corner. Zaniolo came on for the final 25 minutes to mark his long-awaited return to the pitch, but the moment was soon ruined when Insigne curled a magnificent strike into the top corner from an acute angle in trademark style.

The visitors again had Lopez to thank when the goalkeeper displayed sharp reflexes to deny substitute Dries Mertens late on, and a minute later Giovanni Di Lorenzo headed in, only to be denied by the offside flag.