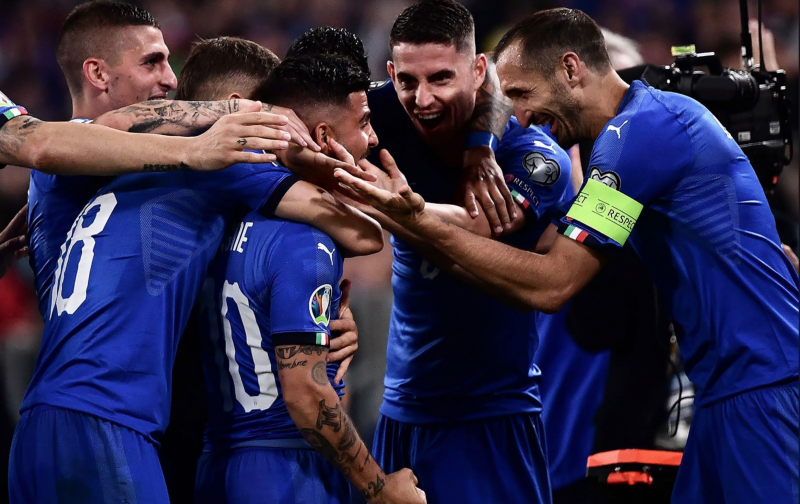 A sublime volley from Lorenzo Insigne paved the way for Italy to come from behind and beat Bosnia and Herzegovina 2-1 in Turin.

Roberto Mancini’s men’s perfect start to European Championship 2020 qualification looked to be under threat after the visitors took the lead through Roma forward Edin Dzeko.

However, that beautiful volley from the Napoli ace levelled things up before the break before the excellent Marco Verratti grabbed a late winner to keep his side out in front atop the group.

The 9,000-strong travelling contingent made things a little more uncomfortable for Italy than they should have been considering it was a home fixture and they were left pleased with much of their side’s early efforts.

Sitting deep, they snuffed the Azzurri out reasonably comfortably and restricted them to few real opportunities, while looking like a threat on the break themselves, as they showed on 18 minutes. That was when Edin Visca look certain to score only for Leonardo Bonucci to deny him with an impeccable block but the Juventus man couldn’t provide another crucial interception shortly afterwards when he and his teammates did fall behind.

It was a name they were all too familiar with who struck the lethal blow when a neat move down the right flank resulted in the ball being prodded across goal and after Bonucci failed to provide a clearance, Dzeko was on hand to score his 56th goal for his country.

The closest Italy came to a response before the interval came via their veteran marksman in attack as Fabio Quagliarella steered a low attempt at goal which Ibrahim Sehic managed to divert to safety and keep his side in the box seat at the break.

It took Italy just four minutes of the second half to respond through thanks to a phenomenal goal straight from the training ground at Coverciano. A corner was floated to the edge of the area where Insigne was lurking unmarked and with intent, which became apparent when he blasted a fantastic first time volley into the back of the net to level.

However, Bosnia remained a considerable threat and Salvatore Sirigu was kept on his toes in the home goal, doing well to keep out a Visca drive.

Two headers in quick succession looked like giving Italy the lead only for Ibrahim Sehic to keep out both Giorgio Chiellini and the unlikelier source of a headed goal, Insigne.

But the hosts wouldn’t be denied and four minutes from time, grabbed what proved to be the winner when the excellent Verratti collected the ball in the area and found the corner with a clinical low curler.