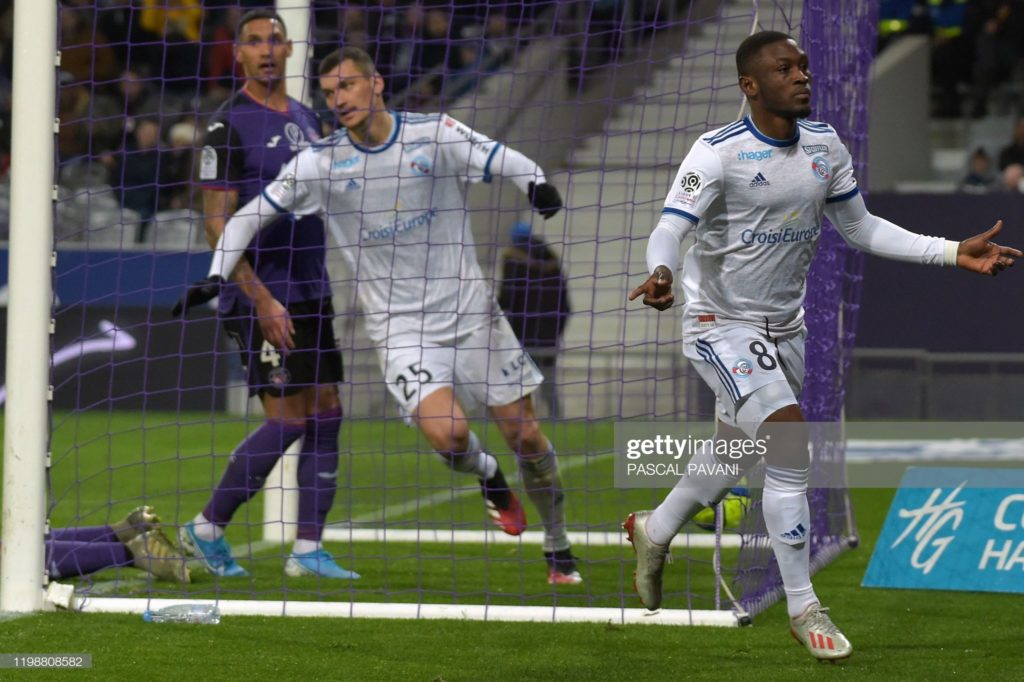 Ghana striker Majeed Waris has been named among top European players who became instant hits after they were bought in the winter transfer window.

The winter transfer window has closed its doors in the main European championships. And several offensive players have already justified the investment of their new club.

Ghana international Majeed Waris finds his name among those players who have been instant hits following his impressive scoring record for Strasbourg FC in the French Ligue 1.

The 28-year-old joined Le Meinau on a six-month loan deal with the option to buy from Portuguese giants FC Porto.

It took the striker just three matches to hit the ground running for the club, scoring in his last two games to earn them valuable points.

The winter transfer window gives teams in difficulty the opportunity to solve their problems, especially offensively. Espanyol has therefore bet € 20 million on Raul De Tomas (25 years old) to reverse the trend. And the Pericos, launched in the middle of the battle to stay in La Liga, probably do not regret their choice. The Spanish striker, who has been vegetating for six months in Benfica, has scored on each of his appearances since his arrival in Catalonia: 5 achievements in 5 appearances in all competitions. A success which also brings in € 500,000 in bonuses to Lisbon residents.

Flawlessly, 19-year-old Erling Braut Håland held the pace until this weekend. The Norwegian, recruited from RB Salzburg for around 25 M €, had scored 8 goals in his first four appearances in all competitions in the jersey of Borussia Dortmund! Mute in his 5th match against Bayer Leverkusen this weekend (4-3, 21st Bundesliga match day), the Scandinavian striker, author of 36 goals on all terrains in Europe since the start of the financial year, remains on impressive standards for its debut in the Ruhr area.

Musa Barrow (21) also did a lot of good on attacking Bologna. In lack of playing time on the side of Atalanta Bergamo (8 appearances in all competitions), where he had not scored since the start of the season, the Gambian international lost no time. Under the orders of Sinisa Mihaijlovic, the native of Banjul is 3 goals in 4 appearances in Serie A. His double, Friday on the lawn of AS Roma (2-3, 23rd day), allowed his team to take three places in the ranking (7th). And to say that it was only his first tenure! Czech Milan Skoda (34) has 3 goals in 5 games since signing at Rizespor.

Immovable, Zlatan Ibrahimovic quickly gained this status at AC Milan. Back at the Rossoneri, the 38-year-old Swede is already the boss of Stefano Pioli's attack. And if some observers were puzzled about his chances of shining again in San Siro after two years in Major League Soccer at the Los Angeles Galaxy (52 goals in 56 matches in Major League Soccer), the former Parisian quickly put everyone Okay. On his first five outings in all competitions, the native of Malmö has already found the net three times. Durable.

The Cameroonian international, landed at Olympique Lyonnais on loan with option to buy from Villarreal, played his first match in his new colors against the club of the Pink City. First outing and first goal for the Gones (3-0, 21st day). In total, the ex-Angevin is at 2 achievements in 5 appearances for Rhodaniens. The results are identical for the Nîmes resident Yassine Benrahou (21), who arrived from the Girondins de Bordeaux on loan, who is giving fresh air to the Crocos, now 18th and barragistes. Across the Channel, we will mention Steven Bergwijn (22), author of a nice goal for his Premier League premiere with Tottenham against Manchester City (2-0).