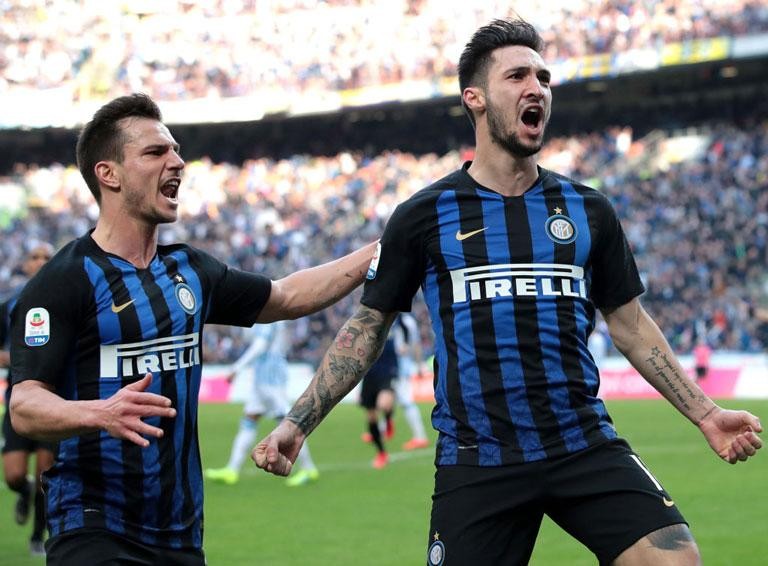 Inter Women’s exciting young side finished off their debut campaign with a remarkable result, and now mark this achievement by launching the kit they and their male counterparts will wear next season.

The club’s new jersey takes inspiration from the classic away kit the Nerazzurri wore in the 1989-90 season, with a band of diagonal stripes stretching across the chest and stylishly intersecting the traditional vertical black and blue lines.

Diagonal stripes were also a key element of a former club crest used between 1978 and 1988, and here they form the focal point of a shirt which is beautifully framed by a white V-neck collar and white trim on the sleeves.

The kit is completed by black shorts and colour blocked socks – half black, half blue – taken directly from the neck of the Biscione, an enduring club symbol.

An elevated trim ensures the Inter crest really stands out, and inside the jersey is an ‘inner pride’ feature paying tribute to more Inter heritage. It takes the shape of a St George’s Cross, to highlight the club’s connection to the city of Milan, as well as a star, the word ‘Internazionale’ and ‘1908’ in honour of Inter’s founding year.

“Inter has an incredible home identity, so the challenge was to execute their iconic stripes in a modern and disruptive way, while also respecting their rich tradition,” said Pete Hoppins, Nike Football Apparel Senior Design Director.

“We looked back at the iconic diagonal stripes used on the away jersey in 1989 as well as the old club crest and it led us to this very classic design with a break of diagonal stripes across the chest.”

The 2019-20 Inter Milan home will be available from may 23rd on nike.com store.inter.it and official retailers and the male team will wear it on pitch during the game on may 26th.