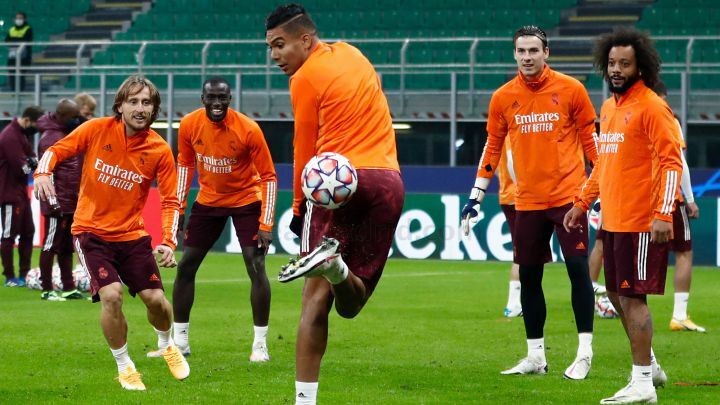 All the latest team news ahead of the crunch tie between Inter Milan and Real Madrid in Champions League Group B on Wednesday 25 November.

Real Madrid and Inter Milan, the two teams that were expected to be on the top half of Champions League Group B at this point, face off at the San Siro in a must-win game for both European giants on Wednesday evening.

Inter vs Real Madrid: how and where to watch - times, TV, online

Madrid managed to see off the Italian side 3-2 at the Estadio Alfredo di Stefano in their last outing as they began the process of salvaging their Champions League hopes following a 3-2 defeat to Shakhtar Donetsk and 2-2 draw with Monchengladbach (two clubs somewhat surprisingly sitting first and second in the group as it stands). That meeting in the Spanish capital on 3 November was the first meeting between Madrid and Inter in European competition for more than 20 years.

Now Zinedine Zidane’s will look to make it back-to-back wins over Inter, but their chances of doing so will be affected by the loss of key striker Karim Benzema, who also missed last Saturday’s 1-1 draw with Villarreal in LaLiga due to a muscle injury picked up against Valencia prior to the international break.

The veteran French forward is one of several injured players who have missed the flight to Milan, where the Zidane will hope Eden Hazard can finally put in a match-winning performance in a high-stakes fixture for the first time since his €100 million move from Chelsea in the summer of 2019.

Third choice striker Mariano is expected to start as centre forward in the absence of Benzema and Luka Jovic, who misses out due to coronavirus. The Spanish-Dominican forward scored within two minutes of his first start for Madrid since May, 2019 against Villarreal last weekend and will be keen to take advantage of another rare opportunity to impress Zidane by adding a second consecutive goal against Inter.

Madrid have won seven of their last eight games against Italian opposition in the Champions League under Zidane, who is seeking his fourth European Cup title as coach of the competition’s most successful club. Defeating Inter at San Siro, where Madrid last played a competitive fixture in 1998, will be seen as crucial to Zidane’s title ambitions as the LaLiga club look to turnaround two consecutive seasons of disappointment in Europe.

Inter will look to Lautaro and Lukaku

Last season’s defeated Europa League finalists, Inter Milan, meanwhile, are also in do-or-die mode after having failed to win any of their three opening games in the group, with defeat to Madrid last time out preceded by two consecutive draws against Shakhtar and the so-far undefeated Monchengladbach.

Inter will no doubt be pinning their hopes on formidable striking duo, Lautaro Martinez and Romelu Lukaku, taking advantage of Madrid’s depleted backline, where the visitors are missing influential captain Sergio Ramos due to a hamstring injury. Lukaku missed the reverse fixture earlier this month and his return will be a major boost to Inter’s chances against the Spanish champions.

Coach Antonio Conte could also hand a start to talented Moroccan full back and former Madrid player, Achraf Hakimi, who completed a €54 million move to Inter from Madrid following a two-season loan spell at Borussia Dortmund.

Hakimi, along with former Manchester United Ashley Young, will likely be named as wing backs, who could offer a lot in wide attacking roles for the home side, potentially creating big problems for Madrid full-backs Dani Carvajal and Ferland Mendy.

Inter Milan are missing midfielders Matías Vecino and Stefano Sensi, as well as forward Andrea Pinamonti through injury, while Marcelo Brozovic and Aleksandar Kolarov are unavailable due to coronavirus.

Real Madrid, meanwhile, will be without the aforementioned veteran pair of Sergio Ramos and Karim Benzema, with Fede Valverde, Álvaro Odriozola, Eder Militao also missing out through injury. Serbian striker Luka Jovic has also not travelled and is currently in quarantine following a positive coronavirus test result last week.

Inter Milan vs Real Madrid: what the managers said

Antonio Conte (Inter Milan): “For us it is a final. We know the history of the team, not only from the past, but also from recent history. We know that we don't have many options other than to have an important result. We have shown that if we play well and are focused, we can win the game…. We still have three games left and we have to get at least seven points. It is one of the most difficult groups in the Champions League, but I think we have shown in previous games that we deserve much more. But it is true that the results have not come and we have to see why.”

Zinedine Zidane (Real Madrid): “In our first game against Inter, none of the things that you're saying actually happened. We struggled in the game? That's to be expected, but I saw a team that started the game well and finished strongly. You're bound to struggle because you're up against a very good team. The same thing happened the other day against Villarreal. We were leading until the 74th or 75th minute and in one move they score; these things can happen. I'm not a fatalist, the only thing I'll say is that these things happen in football, we work to improve our defensive game, so that we don't concede and then try and score goals.”