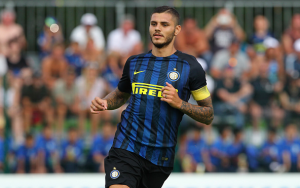 As they look to replace Gonzalo Higuain in attack, Napoli have been rebuffed by Inter in their efforts to bring in Mauro Icardi.

Higuain is expected to join Juventus some time very soon, and Icardi has been under fire at Inter recently following comments made by his wife, thus it appeared like a perfect transfer.

According to La Gazetta dello Sport, however, Napoli president Aurelio De Laurentiis has had a €40 million bid for Icardi rejected by the Nerazzurri, who have claimed they wouldn’t even sell their captain for €60m.

There was a potential five-year deal worth €6m per season for the 23-year-old, however the Biscione are determined to keep his services at the Stadio Giuseppe Meazza.

Icardi moved to Inter from Sampdoria in 2013 and was joint Serie A top scorer for the 2014/15 season, and has scored 52 goals in 105 games since moving to Milan.