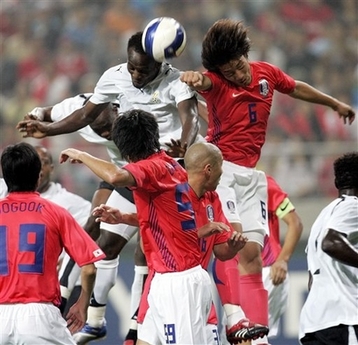 Ghana will look to find some crucial momentum when they take on South Korea in both sides' final friendly before the 2014 FIFA World Cup.

Kwesi Appiah's team lost 1-0 to the Netherlands in Rotterdam at the end of last month and by the same scoreline to Montenegro in March, meaning they have not won since the turn of the year.

Ghana, who came within a whisker of qualifying for the semi-finals of the 2010 World Cup in South Africa, face a tough task getting out of Group G in Brazil having been pooled with Germany, Portugal and the United States.

Appiah will surely want his team to gain some confidence on Monday when they clash with South Korea in Miami.

Four years ago, Ghana reached the World Cup quarter-finals but missed out on a berth in the last four to Uruguay after Asamoah Gyan's spot kick in the final minute of extra time hit the crossbar, following Luis Suarez's handball on the goal-line.

While Ghana's form indicates they may find this year's World Cup tougher, Samuel Inkoom, who played twice in South Africa - including the controversial Uruguay game - reckons they are even better in 2014.

No African country has ever reached the semi-finals at the World Cup.

"I believe we have the quality, experience and team spirit to go even further (at the World Cup) this time around," the Dnipro defender said in the lead-up to Monday's friendly.

Hong Myung-bo's South Korea are in similarly poor form to Ghana with three defeats in their past four matches, including a 1-0 loss to Tunisia last week.

South Korea triumphed 2-0 over Greece in March but lost meekly to the USA and Mexico in their two games preceding that contest.

But in a blow to Hong's preparations, the South Korean squad has been hit by a virus this week, while Appiah will have to monitor the fitness of goalkeeper Adam Kwarasey, who left training with a suspected thigh injury on Tuesday.

South Korea triumphed in the last meeting between the two teams in 2011, having lost their previous two.

Gyan will be hoping his fine form against the Asian nation continues having netted four times across those three fixtures.

In Brazil, South Korea have been drawn in Group H alongside Belgium, Algeria and Russia.