Ghana midfielder Rabiu Mohammed talks about his personal and professional life, the Ghana U20 experience in 2009 and also discusses his future ambitions to be a farmer.

You are now a household name in Ghana football, where did it all begin?

RM: I started playing football in Konongo with a team called Mesas. Eventualy the club got defunct and it became DC United. Later on I moved to join Liberty Professionals.

RB: At the time I arrived at Liberty, there were some senior players there. I remember Sulley [Muntari] was the one who took me to Liberty. He gave me to the club for them to register me for the league but then the officials were hesitant because they had not seen me play before. But Alhaji [Sly Tette] and Mr. Ansong had heard of me and so they took the risk to register me. I met the likes of Kwadwo Asamoah, Patrick Antwi, Eric Bekoe, Emmanuel Baffourâ€¦., a lot of players.

Did you have any fears upon arriving and meeting all these players at Liberty?

RM: No, because Liberty was a team I had admired and supported even during my time in Konongo. So I was only excited I was registered there. There were challenges there but then I used it to challenge myself to get to the level of the others. Then I realized at Liberty, everyone knows how to play football and that for me to excel there, I needed to bring something unique to the table. So I decided to add tackling to my game. Tacking is enhancing your strength and speed so you can always disarm your opponent when he is in possession. So I wake up around 5am and then do runs to McCarthy before coming to training.

When I first arrived at Liberty I was ranked last amongst the midfielders there but when I started my special training I realized I kept moving up the perking order. Then they started playing me in friendly matches, Jones Attuquayfio was then the coach of the side but he didnâ€™t know me like the assistant coach did. So the assistant coach always chose me in his squad aside that of the senior coach. Then one day I got into the senior team where the likes of Tua Kemicks were they and they scored goals as well.

I would have been OK if I had played about 10 or fifteen minutes. Our first game â€“ a league match â€“ was I think against Great Olympics and then during the game, I think we were down and we needed a goal. So the coach asked for a striker to go warm up but I got up to also go do the warm up. The coach then told the technical bench that he didnâ€™t ask me to warm up but then they explained I did it on my own accord. 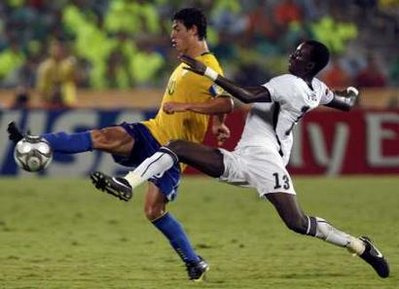 Rabiu was part of the historic Ghana U20 squad of 2009
I did the warm ups like it was physicals so he [Jones Attuquayefio] called me over and gave me 15 minutes of the game I so desired. On our return home, I started playing 90 minutes for the team.

A lot of people, even your teammates says you look like a Senegalese due to your stature and not a Ghanaian. Any truth in that?

RM: Not true at all. My mum is an Ashanti and my dad is a Dagomba. But then due to my structure people mistake me for a Senegalese.

I remember when I first got to Spain where there are a lot of Senegalese, I encountered someone who clearly needed help. He wanted to communicate with me and he was speaking the language but I didnâ€™t even understand. Every Senegalese there thought I was one of them so they accorded me special treatment with their greetings and all.

I spoke to Sellas Tetteh [Ghana U20 coach] and he touted your midfield credentials. That you are very combative and all.

RM: I was never like that but then I had to adjust. I always try to learn to improve myself wherever I go. I changed my style of play constantly depending on where I am.

How did the 2009 Word U20 tournament affected your life, the impact it had on your life.

RM: I always thank God he gave us the strength for that tournament. We had a very strong team. We had two players for every position and everyone knew how to play. So whenever anyone was left out, it was instinctively understood. Our qualities were almost at par. But then the coach wanted someone who can tackle because all the others were good at their own unique abilities. And we went into every match to go die.

We went with the mentality that once we couldnâ€™t score, the opponent will also never score against us. We never wasted chances. We could defend the whole game but once the ball was in the penalty area of our opponents, we scored.

About the impact it made, I think you can see most of the players from that squad are now in the Black Stars and playing in big teams in Europe. 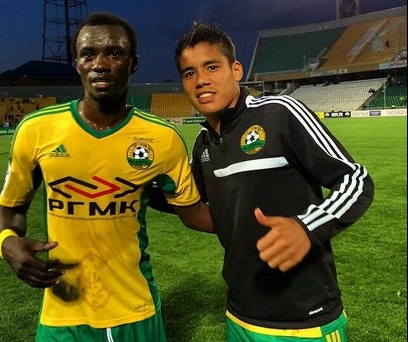 Rabiu Mohammed now plays for Kuban Krasnodar
And then in the final, Ghana went one man down before halftime. Did you think at the time that things will still go well?

RM: The sending off came twenty five minutes to halftime so it was very tough on us. Things were not easy and Dede Ayew was the captain. So we had to change our game plan, we committed ourselves to defend and ceded possession to Brazil. So the Brazilians had a filled day with possession with their skills and all. The fans were hailing them but then Dede Ayew told us to keep holding our ground and never to be worried about how they were playing most of the game.

We had at the time had some experience playing in Europe so we were quite conversant with doing the hard stuff. They were playing all the football and we were doing the defending. Then we went in for halftime and there we decided were werenâ€™t going to play a striker. So Dede Ayew had to slot in at the left-full back position and the others also took defensive positions, we didnâ€™t want a goal, we wanted to prevent one. So after 71 minutes the Brazilians started crying on the pitch and it gave us more confidence to fight on. Then when they got chances, they messed them up. It was there that we realized that the gods were with us.

That final [penalty shootout] kick by Agyemang-Badu, what went through your head at that time?

RM: I had been replaced so I was on the bench. I knew Agyemang-Badu was an expert in penalty kicks so I had no fears when he went to take it. So I was thinking he should get on with it so we get it done. But there was a little fear in me even though I was extremely confident in Agyemang-Baduâ€™s ability to tuck it away. So I didnâ€™t watch the kick and all I saw was he taking off his shirt and we chasing after him. I never saw that kick.

What do you do to relax when not playing football?

RM: If I am in Ghana, I am with my mum or with my girlfriend or with my friends. If am outside Ghana, I play video games or watch old football games. I use it sometimes to put myself to bed.

What would you have been if you hadnâ€™t played football?

RM: I admired farming a lot so even after football I have the ambition to go into farming.