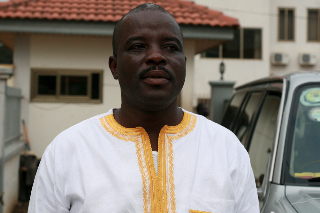 After winning promotion back into the Ghana topflight following their relegation two seasons ago, Tema Youth are looking to make a lasting impression in next season's Glo Premier League campaign.

GHANAsoccernet.com is privileged to bring to you a comprehensive interview with Chief Executive Wilfred Kwaku Osei who gave an insight into how his club managed to bounce back, structures being put in place and the future of Tema Youth Football club.

He also had time to analyze the current state of Ghana Football, what should be done to make it better and his personal ambition of becoming an Executive Committee member.

GHANAsoccernet.com: Congrats on winning promotion to the Premier League, how does it feel to be back in the Ghanaian topflight?

WKO: Thank You. Definitely we are excited at the challenge being offered because if you compare Division One and Premier, there is a stark difference and all we have to do is to live up to the challenge.

Itâ€™s not going to be that easy, because we have been in there before and I say two years is enough time for things to change. While we were on the scene Kotoko and Hearts were dominating the league but now itâ€™s changed.

GSN: How difficult a league is it in Division One?

WKO: That is where you have test of wits. You need a team that has character to prevail within that segment of the league. Itâ€™s not easy, but really itâ€™s the preparation ground for you to play at the highest level and if you are able to endure yourself through 17 or so matches, I think it should be enough to guide you to play at the Premiership that has about 30 matches.

People may have different terminologies to describe Division One but I see it differently. It is a preparatory ground and all you have to do is to make sure you have your structures in place. We beefed it up in terms of contents and quality and your recruitment of players should be of a certain standard. At the end of it all, commitment, dedication and discipline should be your guideline if really you want to succeed.

GSN: A lot of relegated teams promised an instant return to the premiership but have so far not been able to do so, what unique thing did Tema Youth do to win promotion in two years?

WKO: We were very direct and objective to our situation because if you get relegated the tendency is that you turn to underrate those clubs that you are competing with.

Last year, there was a failed attempt at the Middle League. Just after that there was a new focus, so what we did was that we disposed off those old players that we had competed with in the Premiership because we realized playing at the premiership level was a vast difference compared to in Division One.

Those players had out-lived the Division One level so the ego and the competitive spirit was not there. We then recruited new players from Divison Two, some from Division one and most of them from Colts to beef up the squad and it appears we have been vindicated by this approach.

It wasnâ€™t easy for us to go by that route because it involves a lot of money and I must say that we brought on board 16 players and this is not easy to achieve in terms of financial aptly and even administering them because trying to sell your philosophy to these new guys for them to appreciate and implement over this short period of time, is not easy.

GSN: Having experienced both the topflight and the lower division, what structures are you putting in place to ensure Tema Youth stays and even does better in the League.

WKO: What we are going to do will not be different from what we did. We have the core of a team and we are not going to disband them because if a team goes 17 league matches unbeaten at the Division level where there is a lot of intimidation should tell you the stuff they are made of in terms of character and commitment. We are going to maintain this squad and revamp it with certain key â€˜experiencedâ€™ players as you call it.

In this wise, Tema Youth will not go in for known players, we will go in for the unsung heroes, I donâ€™t need a player with a profile, I need a player who is in current form and that will be the guiding principle in terms of our recruitment.

GSN: Isnâ€™t that too much of a risk because teams find it difficult to cope in the league without experienced tried-and-tested Premiership players?

WKO: That is what people feel but we have done this before, when we came to the premiership no one knew Yahya Mohammed, Ekow Benson, Ernest Sowah whom we took from colts. Edward Affum played one season with us; we got promoted after bringing them from colts. Adjabeng and all these guys we brought them from the grass root. That is what we are noted for, we have a brand of football and that is to use our youthful exuberance to our advantage in terms of pace and all the attributes of a young player and that is what we emphasis on.

GSN: What are the targets for the upcoming season?

WKO: We donâ€™t want to dream yet, we are a newly promoted side. Survival is the watch word and anything else will be a bonus.

GSN: Can you confirm your ambition of wanting to be on the GFAâ€™s executive committee and if so why?

WKO: Yes, I have submitted my papers to contest elections into the executive committee. Is not going to be that easy but I know I have what it takes to represent the new wave of change. I am very objective, very honest to the core and this is what I think we need apart from my technical expertise as a financial guy.

GSN: Can you give me specifics of what you feel you can offer to improve Ghana Football?

WKO: Yes, If you look at the very segment I represent ie Division One we have a mirage of problems like lack of sponsorship and therefore financial problems, security at venues etc. So what I hope to do is to lobby within the executive committee circles to make sure the Division One league be made financially sound, beefed security at match venues and empower the Division One League Board function as well or better than the Premier League Board.

In the larger picture, when we look at the regulatory framework, it doesnâ€™t ogre well for football. How on earth, in this day and age we can deduct points for strip. Due to the proviso that if you donâ€™t present your jersey at a pre-match you are deducted points, I mean, this does not happen anywhere.

Going back a bit on the Division One matter, this level of football has a club in virtually every district in this country, we have district assembly common fund so why canâ€™t we lobby government or parliament for that matter so Division One clubs are remitted some financial assistance.

GSN: Finally, what do you think your chances are ahead of the executive committee elections?

WKO: My chances are equally as good as all the other contestants, that is how I see it. I will not pitch myself above anybody, it is the contest of ideas and all I need to do is not to rest but to make sure I work extra hard to merit every single vote. I need to give reason why people should vote for me and thatâ€™s exactly what I will do.