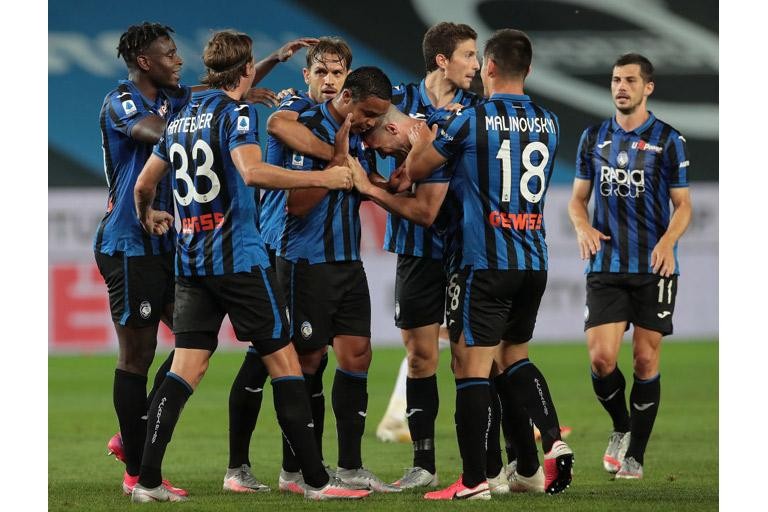 Today the announcement of the agreement:

- The Bank will be Sponsor and Banking Partner of the black-and-blue Club and the main sponsor of all the teams in their youth sector.
- The historic tribune of the stadium in Bergamo, with access from Viale Giulio Cesare, will be named RINASCIMENTO (“Renaissance”), to provide continuity to the programme launched by Intesa Sanpaolo and the City of Bergamo to deal with the Covid-19 emergency.
- The project includes a 40 million euro financing agreement between Intesa Sanpaolo and the Istituto per il Credito Sportivo to renovate the Gewiss Stadium.

Today Intesa Sanpaolo and Atalanta B.C. announce a partnership agreement under which the Bank will become Sponsor and Banking Partner of the Bergamo club. Intesa Sanpaolo will be at the side of the First Team – which is preparing for the Champions League quarter-finals following a record-setting Serie A season – and will tie its name as Main Sponsor to the teams of their youth sector.

The historic grandstand of the Bergamo stadium, which is accessed from Viale Giulio Cesare, will be named RINASCIMENTO (“Renaissance”) to provide continuity to the programme launched by Intesa Sanpaolo and the City of Bergamo to deal with the Covid-19 emergency. The project – which saw Intesa Sanpaolo support the city and the surrounding area during the most complex phases of the public health emergency – provides support to micro and small businesses, small commercial and artisan businesses, start-ups and third sector organisations in Bergamo that have the desire or need to implement projects to adapt, innovate and reorganise their businesses, not least because of the sudden changes in working and living conditions caused by the Covid health emergency.

Intesa Sanpaolo, together with the Istituto per il Credito Sportivo – the principal lender in Italy for sports facilities – has also signed a 40 million euro loan for the renovation of the Gewiss Stadium.

Atalanta Bergamasca Calcio and the City of Bergamo have launched the stadium renovation project to give this piece of strategic infrastructure back to the city while simultaneously creating a new, inclusive and sustainable venue capable of hosting sporting events as well as providing business services and other cultural initiatives. Through the development of this new infrastructure, Bergamo brings its example of Italian pride to Europe, increasing the stadium’s capacity and the quality of the services offered. The works are expected to be completed by the end of 2021 with the renovation of the Curva Sud Morosini, the construction of an underground car park with 285 spaces and extensive urbanisation works.

“We are extremely proud to announce this agreement today and thus make a real contribution to a project that will also allow Atalanta Calcio and the city of Bergamo to play and win in a more functional, larger, state-of-the-art, stadium that will be proudly showcased across Europe”. Commented Gaetano Miccichè, Chief Executive Officer and General Manager of UBI Banca. “This partnership aims to provide tangible evidence of the commitment that the new organisation which is emerging from the integration of Intesa Sanpaolo and UBI Banca for the areas in which they operate, which considers the support it provides to businesses, families, employees and shareholders to be one of the strengths of our banking Group”.

“Establishing a partnership with the largest Italian banking group, which is also one of the largest in the Eurozone, can only make us proud”. Declared Luca Percassi, Chief Executive Officer Atalanta B.C. “Such an important agreement, at such a difficult time as the one we are experiencing at a global level, confirms and strengthens our Club’s determination to continue growing. Completing the Gewiss Stadium renovation not only means providing our fans with a more comfortable and modern structure but also giving a completely redeveloped, more liveable and family-friendly area back to the city of Bergamo and its citizens”.