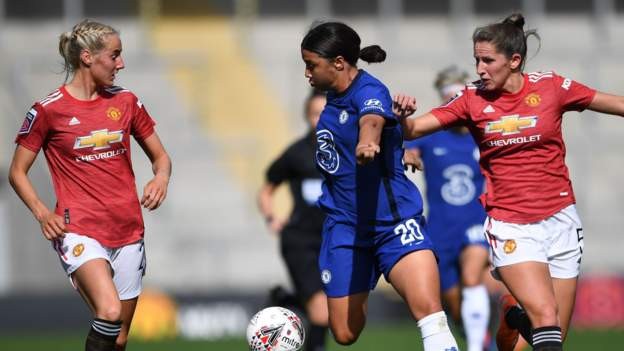 The top two in the Women's Super League meet on Sunday, as second-placed Chelsea welcome leaders Manchester United to Kingsmeadow.

Both clubs have yet to lose in the league this season - but their respective unbeaten runs stretch back much further.

The Blues are three points behind the Red Devils with a game in hand.

The two sides played out a 1-1 draw in their previous meeting, on the opening weekend of the campaign.

Chelsea are out to retain their 2019-20 title, won on a points-per-game ratio after the season was curtailed because of the coronavirus pandemic with them one point below Manchester City in the table, but with a game in hand.

Manchester United, in their second campaign in the top flight, have emerged as early-season contenders ahead of 2019 winners Arsenal and 2016 champions Manchester City, who have finished as runners-up for the past three years.

Rather than feeling threatened, though, Hayes is pleased the WSL has new challengers at the top.

"I like winning, but what I've wanted more than anything else is a competitive league - and we've got it," she said,

"These games are tough. You prepare knowing that if you're not at your best, you're in trouble.

"The fact that there is a different rival this year adds excitement to the women's game. It is great for the league to have so many rivalries."

Hayes thinks former England captain Casey Stoney has done a "brilliant job" in building a competitive United side since taking charge in 2018.

"They are a club of big name and big status," Hayes added.

"She has done a great job to raise the profile of Manchester United and develop a group of players that is competing for titles. She is fast becoming a top manager."

Both teams in fine form

Chelsea are unbeaten in 30 WSL matches, stretching back to a home defeat by Birmingham City on 27 January 2019.

It is the second-longest unbeaten streak in the division's history, bettered only by Manchester City's 31 games without defeat between May 2015 and May 2017.

The west Londoners have won their past four league games, and 11 of their past 12 in all competitions.

The Blues returned to action after a Covid-19 outbreak in the squad with a 5-0 win at Reading last Sunday - with England forward Fran Kirby scoring four times.

"We are hitting our stride," Hayes said. "We were clinical and ruthless last weekend and we are going into the game confident. This team has got another gear in it and that's my job to bring it out."

United go into the game in very similar form, and are unbeaten in 14 WSL matches by virtue of last season being cut short.

They have not played since 20 December, when they thrashed bottom club Bristol City 6-1.

"There's pressure on both teams to perform and put on a show for the women's game," Stoney told BBC Sport.

"Obviously we are away from home and are playing against a very good team full of international stars but it's a game, like every other, that we go into to try and win.

"I have to give Emma Hayes an awful lot of credit. She has been a very successful manager, has won a lot of trophies and has an incredible team at her disposal.

"It must be difficult to pick a team with the amount of international players and the calibre she has got."

Will it decide the title?Chelsea's Sam Kerr opened the scoring when they faced Manchester United in September, while Leah Galton levelled for the Reds

Whichever side wins, they will have momentum for the second half of the WSL campaign, although Arsenal and Manchester City certainly cannot be written off at this stage.

Hayes says she would "never, ever" call this weekend's match a title decider.

"As we know with leagues, they change," she continued.

"The first half and the second half are very different. You are vying for points in and around your competitors and I suspect there will be points taken off each other. There is far too much [of the season] to play."

United have won their past six away games and Stoney expects her side to give Chelsea "a good game".

She added: "All I can hope is that we go with the belief and determination that we can get something out of the game, which we absolutely do believe.

"Ultimately it will come down to those fine margins, I believe. We want to give a good account of ourselves."