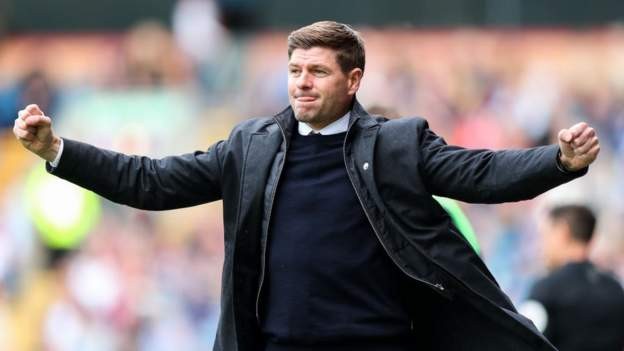 Manchester City's Premier League title equation is as simple as it gets - beat Aston Villa on the final day of the season and the crown is theirs for the fourth time in five years.

Pep Guardiola and his players know destiny lies totally in their own hands. Fulfil their side of the bargain and there will be another title party at Etihad Stadium on Sunday.

And yet there is a mouth-watering subplot as City seek victory against Villa at the same time as their relentless pursuers Liverpool try to beat Wolverhampton Wanderers at Anfield, before hoping the fates favour them.

In this case, the central character is one of the most significant figures in Liverpool's history who, albeit at a distance as Aston Villa's manager, has the opportunity to help take the one major trophy the eluded him in a magnificent career back to Anfield.

As on so many occasions before in his career, plenty of Liverpool fans will regard Steven Gerrard as their best hope of winning a Premier League title.

Gerrard's sole professional focus on Sunday will be to get the result at City that will round off a topsy-turvy season of transition and early rebuilding at Villa Park.

The former Liverpool captain would not be human, however, if his thoughts did not occasionally stray to the potential impact of Villa getting a result, with his beloved boyhood club then beating Wolves to win the third part of a potentially historic quadruple.

The prospect is out there, hanging over what all logic says should be a routine City win against a team with only half their current points total of 90, lying in 14th place.

In among Gerrard's glorious successes at Liverpool, which include winning the Champions League, Uefa Cup, FA Cup and League Cup, there exists the agonising moment when his famous Anfield slip against Chelsea in late April 2014 allowed Demba Ba to score, leading to a 2-0 win for Jose Mourinho's side. It was the catalyst for Brendan Rodgers' team blowing their lead at the last moment, leaving Manchester City as the beneficiaries.

Is this the moment for redemption, of sorts, for Gerrard's biggest disappointment?

It is the stuff of nightmares for City. The stuff of romance for Liverpool.

This is real life, though, and all the form and common sense suggests City will be champions again when the final whistle goes on Sunday.

If, as the title race tightened in recent weeks with Liverpool eating into a lead that once stood at 14 points, you had offered Guardiola's City the opportunity of winning their last game at home to seal the title, the suspicion is they would have signed up.

And one big point of difference is they are facing Gerrard the manager trying to build something at Villa. This is not Gerrard the world-class midfielder and inspirational leader with the ability to shape a game single-handedly.

Steven Gerrard never won a league title as a player despite near misses with Liverpool, most notably in 2014

It is still one of those little twists that seem to accompany every last-day title climax for Manchester City, but also one this experienced, high-quality group of players have proved strong enough to cope with.

In 2012, it was the last-minute Sergio Aguero goal that beat Queens Park Rangers to edge out Manchester United on goal difference and bring the title back to Manchester City for the first time in 44 years.

In 2014, it was a decisive final-day win against West Ham United that claimed it for Manuel Pellegrini's team at the last gasp to inflict more title heartbreak on Gerrard and Liverpool.

In 2019, City had to win their concluding game at Brighton to keep Liverpool at bay in an epic title battle in which Jurgen Klopp's side only lost one league game all season - at Etihad Stadium. They duly did, prevailing 4-1 after a Glenn Murray goal saw them fall behind early on.

City will have cautious confidence they can finish off the job to claim one major prize from a season where they have had to pull themselves together following another devastating Champions League demise, losing a semi-final to Real Madrid that they had in their hands in the 90th minute of the second leg at the Bernabeu.

This is a battle-hardened, richly talented team who have been over course and distance several times in recent seasons in exactly this scenario. It would be a major surprise if City slipped with the line in sight.

Villa, however, have a style that could trouble a City side with a makeshift defence, coping with injuries to the outstanding Ruben Dias, John Stones and Kyle Walker.

The 37-year-old Fernandinho was, understandably, exposed in an unfamiliar role in the 2-2 draw at West Ham and Villa striker Ollie Watkins, who has the dynamism and pace to inflict damage in behind, will be looking to the likes of Emiliano Buendia and Philippe Coutinho to provide the ammunition.

Coutinho's status at Liverpool does not compare to Gerrard's, but the Brazilian was also on the pitch against Chelsea that day in April 2014, and he too could play a role in helping his former club to the title.

City are firm favourites and rightly so - but there has been many a twist in title tales and Gerrard's very presence has provided an intriguing narrative and potential headline grabber.