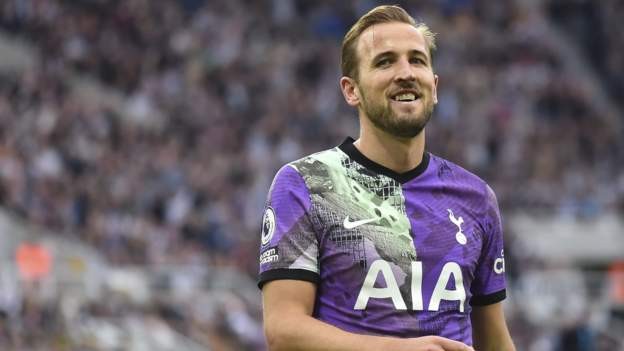 Harry Kane has already scored 10 goals this season and yet there is a sense he has been nowhere near his best.

A solitary goal in the Premier League is a significant reason for that - he had failed to score in the top flight before Sunday's strike in the 4-2 victory at Newcastle.

The 28-year-old missed Spurs' first game of the campaign after returning to pre-season training late following the collapse of a much-discussed move to Manchester City.

But while league goals have been hard to come by, he has been scoring plenty in Europe - and for England - this season.

After the strike against Newcastle, Kane said: "There's always a lot of talk whenever I go a few games without scoring.

"I'm a man who wants to score in every game I play, of course, but I don't panic when there are a few games where I don't score.

"That was my 10th goal overall this season and hopefully I can add a few more in the coming games."

So how is the Tottenham and England captain really faring this season?

Has he really had a slow start to the season?

The verdict on Kane's start very much depends on whether you are judging him on the Premier League or not.

Overall for club and country - as of 20 October - he had scored 10 goals in 15 games. By that date in a season he had only twice scored more goals and only played more games once.

The same is also true if you factor out England games and only count Spurs.

But you would have to go back to 2015-16 for the last time he took seven Premier League games to score a goal.

Liverpool's Mohamed Salah (with 10) is the only Premier League player to score more club goals than Kane's seven this season in all competitions.

If we look solely at the Premier League though, Kane's start to this season has been markedly down on recent years. He has one goal and one assist in his first seven games.

The four seasons before that too, he managed five or six goals each time.

His shots (17) and touches in the opposition box (27) are the fewest at this stage since 2014-15. They are also below any of his seasonal averages in the top flight for Spurs.

At international level, Kane had managed three goals in three games for England before failing to score in their 1-1 draw with Hungary. That ended a 15-game scoring run in World Cup and European Championship qualifiers and he was replaced after 76 minutes, despite the fact the Three Lions were chasing a late winner.

Kane has dropped deeper in the past year or so and he was not Spurs' most advanced player in a game by average position (based on where his touches of the ball came) in any of his first five Premier League starts this season.

He has only touched the ball 27 times in the opposition box in the league this term, fewer than 35 other players and level with Newcastle's Joelinton.

But against Newcastle United, he was Spurs' most advanced player, also covering more distance (10.32km) and making more sprints (20) than in any other game this season.

And he got on the scoresheet, beating the offside trap to dink in, a goal awarded by the video assistant referee after initially being ruled out.

Former Scotland international James McFadden said on Match of the Day 2: "He's come in for a lot of criticism for dropping deep and not getting in areas to score goals but against Newcastle he showed his intelligence.

"He showed a desire to get involved and then led the line. He was always on the move."

Despite sitting fifth in the table after back-to-back wins, Spurs have only scored nine goals in eight games (and are the only team in the top half with a negative goal difference).

New Spurs manager Nuno Espirito Santo has come in with a reputation for being more defensive-minded than some other previous managers. Wolves only averaged 45 goals a season in his three Premier League campaigns, despite finishing seventh twice.

Former England defender Jonathan Woodgate, who has managed Middlesbrough and Bournemouth, told BBC Radio 5 Live: "The story always revolves around the best player and Harry Kane is their best player by an absolute mile.

"How about creating some chances for him? What is Kane expected to feed on? It is a disgrace. Help him out.

"They have the lowest distance covered as a team in the Premier League.

"Tottenham were supposed to be challenging this season. I find it amazing, from being the top team under Mauricio Pochettino to the lowest now [for distance covered]."

Spurs visit West Ham on Sunday in the Premier League.

Hammers coach Kevin Nolan said: "Harry was trying to get out [of the club] and trying to switch back on is quite difficult.

"But you have another 10 players who need to help one of the most prolific strikers we have seen in England in my time.

"Nuno's Wolves didn't create a lot of chances. There are a lot of people at Spurs who need to stand up and be counted.

"They have gone from a high-octane pressing team to what they are now and it isn't going to be favouring Kane. All this is probably still a hangover from the summer and what happened with the manager search, and he probably still has that hangover as well."

Is it inevitable he will get back to his best?

Kane can still take encouragement from how his goalscoring often picks up as a season goes on.

Last term he was on 10 goals for club and country by this date and ended up scoring 39.

He has plenty to aim for too - with the top scorer records for England, Spurs and in the Premier League all within his reach, as well as the aim of winning a first trophy.

He is 12 goals behind Wayne Rooney's England scoring record of 53, after 55 fewer caps than the former Manchester United man.

Kane could conceivably reach that by the end of the World Cup in Qatar next winter.

His total of 228 goals for Spurs is 38 behind the club's all-time top scorer, the late Jimmy Greaves.

Kane is on 167 Premier League goals, still 93 off Alan Shearer's record - but he should break into the top five this season. Frank Lampard scored 177. And third-placed Andrew Cole's 187 is reachable, too, if Kane has a prolific campaign.