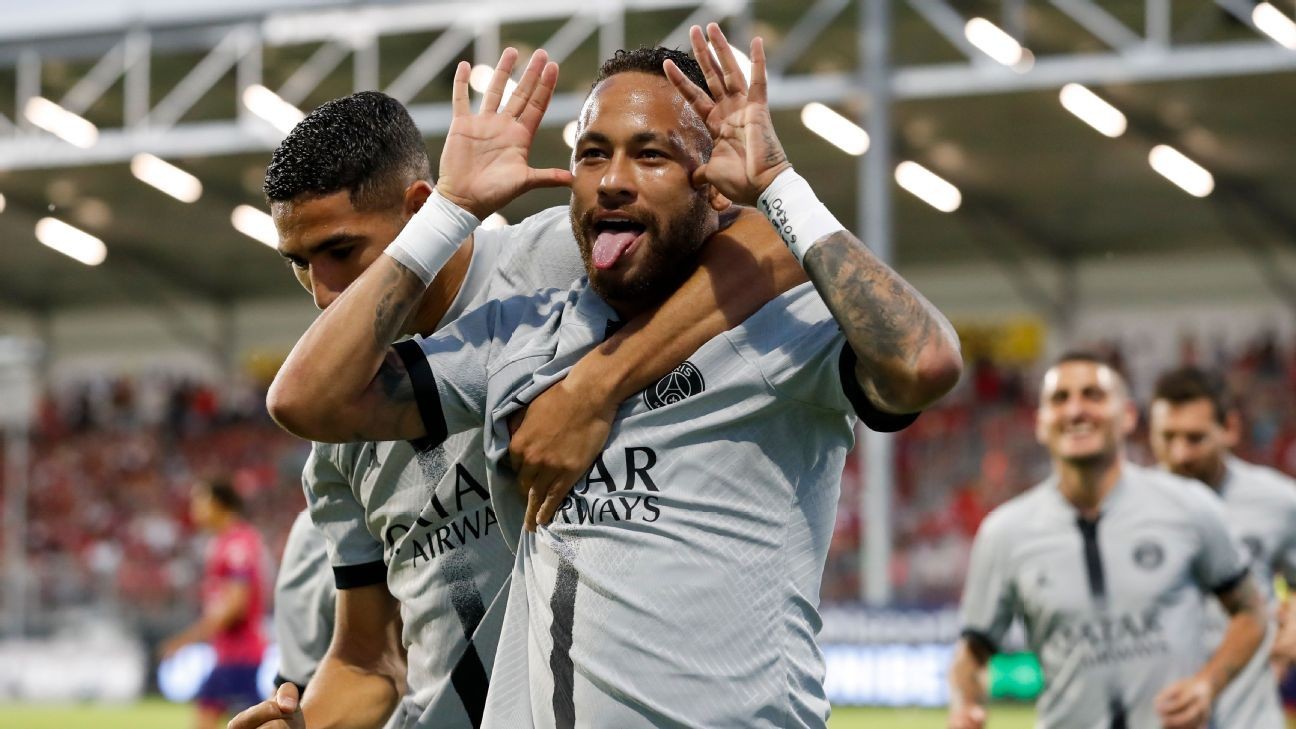 Antoine Kombouare, the present Nantes manager and former PSG defender (1990-95) has pretty much seen it all in football. But even he was surprised at what he saw. He couldn't help but casually question Neymar (although a bit tongue in cheek too) during the French Super Cup between PSG and Nantes 10 days ago in Israel: "Oh so you defend now, do you?"

It made the Brazilian forward smile; indeed, he had just sprinted 30 yards to get back into a defensive position as PSG had lost the ball and Nantes were about to attack. If this was new to Kombouare, it felt also new to a lot of people watching.

Not far from the pair, Christophe Galtier, the new PSG manager, smirked when he heard what his counterpart said. If there is a new Neymar -- or, perhaps, a more focused, committed and determined Neymar -- it is also thanks to him or, shall we say, because of him.

When Galtier and new sporting director Luis Campos arrived in Paris, in July and May respectively, they made sure that Neymar understood he was no longer indispensable to this team. Campos never told him directly that he wanted to find him a new club, but the No. 10 and his entourage were aware that PSG were open to letting him go.

It's arguably the wake-up call the former Barcelona star needed. Neymar came back four days early from his holidays and in good shape, unlike last summer when he returned to training overweight. He's been working hard since the start of July to make sure he would be ready and sharp for the start of the season like never before. We saw some signs of his renewed focus in some of PSG's preseason friendlies, but nothing that could have prepared us for what we saw in the 4-0 rout of Nantes in the Super Cup and then the 5-0 thrashing of Clermont on the opening weekend of the Ligue 1 campaign.

Simply put, it's been Neymar at his best. From goals (3) to assists (3), as well as things like chances created (9) and fouls against him (7), he's been unstoppable. It's fair to argue that these weren't the toughest opponents to open the campaign, and that this narrative needs to be proven over the coming weeks, but it does feel as though Neymar is happy again, which is more significant than his stats.

Neymar's been incandescent for PSG in the early weeks of the new campaign, but time will tell if his renaissance is for real. Catherine Steenkeste/Getty Images

For periods (both short and long) since his arrival in the French capital five years ago, happiness has been notably absent from Neymar's life for various reasons, both on and off the pitch. He turned 30 last February with a party far less extravagant than previous ones, while he's displaying more maturity and, perhaps, he has the self-awareness that his career is entering its final chapter. The clock is ticking and Neymar wants to enjoy the remaining years of his playing career as much as possible. He looks as if he's on a mission not just to rediscover his best form, but to have fun again and win with club and country.

It's also true that he's got a bit of a point to prove. The optics of being offered to big European clubs, as well as the U.S. and other more exotic destinations, can't have been missed by him, especially when he just signed a new contract only a year ago that runs through June 2027. It's possible he felt upset by the fact that PSG were trying to push him out. That feeling was magnified when Nasser al Khelaifi, the president, talked about "the end of the bling bling era" at the club; everybody assumed that he was having a go at Neymar.

So now, he is seemingly happy to run, defend, fight for possession, think about others, and be a team player. And, of course, to enjoy his football. He will never have the acceleration on the ball of his early 20s, nor the dribbling prowess of his youth, but the talent is very much still there.

The arrival of Galtier has been essential to this progression. Neymar was not too keen on former manager Mauricio Pochettino; Lionel Messi wasn't either. Yet Neymar gets on well with Galtier. Publicly, the manager also said the right things like he wanted to keep him and was going to rely on him. Galtier knows PSG are stronger with Neymar at his best than without him, but Neymar has also understood that if he doesn't do what the manager tells him, he will drop him. There is no status or "playing favourites" anymore.

Tactically, the new 3-4-1-2 formation has moved Neymar closer to Messi in the middle of the pitch over the first two games, and it will keep him closer to Kylian Mbappe too when the Frenchman comes back in the team after his suspension (served for the Nantes game) and a minor groin injury that forced him to sit out vs. Clermont.

Neymar cannot play wide anymore: he's featured centrally for Brazil for a while now under Tite, and a similar shift at PSG is the best thing that could happen to him at club level. Galtier recognised that and that Neymar is shining. To maintain this form, performing against top teams and helping take PSG to that elusive first Champions League title, Neymar will have to stay fit and also focus on the invisible work off the ball. Now that he's put himself in such a good position this early in the season, it would be a shame to let it go to waste.