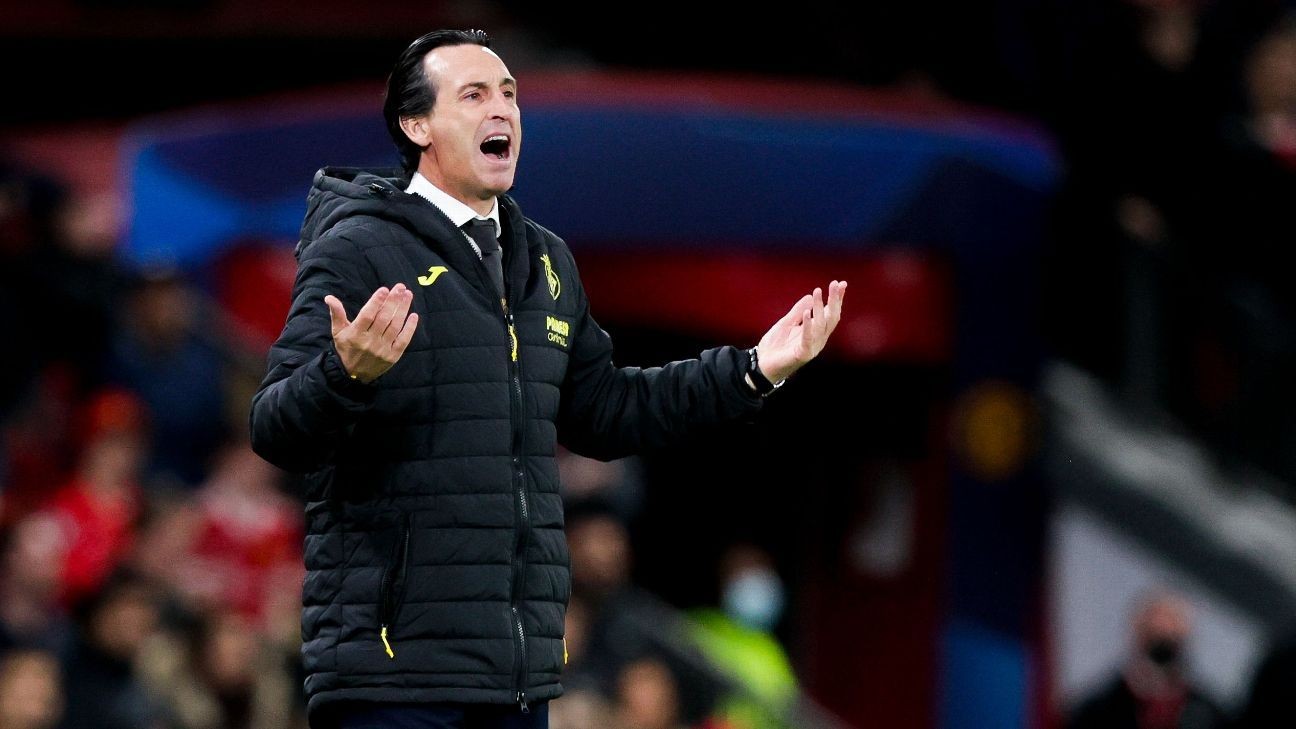 Unai Emery can thank his lucky stars that his billionaire employer at Villarreal, Fernando Roig, is both a grateful and forgiving man. At least for the moment. There are plenty of ruthless, elite clubs around Europe who, in identical circumstances, would already be sniffing out opportunities to poach a rival coach -- not to mention eyeing up free agents like Diego Martinez or Ernesto Valverde.

In theory, the elegant, articulate and energetic 50-year-old Basque coach, winner of Villarreal's first-ever European trophy, should be safe as houses. Last season in the Europa League he finally brought the glory that Roig and his brilliantly run, family-owned club have lusted after for a quarter of a century. But Villarreal's 3-1 defeat to Barcelona at the weekend confirmed a run of calamitous errors, terrible luck, and horrible results.

European glory may be Emery's calling card (he is a record four-time winner of the Europa League as manager), but defeat in Atalanta next week would mean Villarreal are knocked out of the Champions League at the group stage. Moreover their position in LaLiga (12th) is far closer to relegation (five points above the bottom three) than a spot to qualify for a UEFA competition next season (eight points off sixth-placed Rayo Vallecano.)

Worst of all Fernando Roig Sr. and Jr., the most powerful men at the ambitious club, must be wondering if Emery's flirtation with Newcastle earlier this month undermined his authority with the players and their trust in him. And if this is the reason the club are on a slide?

It's well known that Newcastle interviewed Emery and Eddie Howe and, initially, the Spaniard was offered the job. It's less well known that the Magpies were so sure that they'd got their man that they had a private jet ready to fly Emery to the north east of England the day after Villarreal's 2-0 win over Young Boys in the Champions League (Nov. 2) only to be embarrassed by the shock discovery that he'd had a significant change of heart overnight.

I'm one of those who had been calling close contacts around the Yellow Submarine for a month since being tipped off that Emery was top candidate for Newcastle's new Saudi-backed owners. The universal response was that if Villarreal's manager was keen to jump ship mid-season it was going to come not only as a horribly unpleasant surprise for the Roig family, and their vice-president Jose Manuel Llaneza, but it would also unleash a torrent of fury at the betrayal.

Hence the point about Emery needing to feel grateful that the Roig family, until now, have proven the old adage: "To err is human; to forgive, divine." Because since being caught like a naughty schoolboy and promising to behave again there could easily be a case made that his work hasn't been up to scratch.

Three of the four matches since have seen Villarreal throw away big chances of victory, against Celta, Manchester United and Barcelona, via the twin sins of consistently missing glaringly good chances and defending like a pub team.

Against Celta, goalkeeper Geronimo Rulli spooned a shot back to Brais Mendez for an equaliser with 18 minutes left after they had taken a 1-0 lead.

Against United in the Champions League, Villarreal played well enough, spurned lots of chances, saw David de Gea make a pair of wonder saves but then gifted Cristiano Ronaldo a simple goal in the 78th minute thanks to a calamitous lack of defensive concentration from Rulli and Etienne Capoue. Jadon Sancho then made it 2-0 late on, leaving them needing to avoid defeat in Italy next week to stay in the competition.

Then, having not only pegged Barcelona back to 1-1 but dominated the latter stages of their match on Saturday, Villarreal committed a pair of Bambi-like errors to gift Xavi's team two goals and their first away win of the season. (In his defence it's worth noting that the officials failed to give two clear-cut penalties in Villarreal's favour, but when you're down, you're down.)

These facts are compounded by Emery's team having taken just five of their last 21 LaLiga points and added four 0-0 draws this season to the six scoreless draws Villarreal notched in all competitions last time out. Not, by any stretch of the imagination, what he was brought in to do.

Football is an unforgiving sport, one where coaches expend massive energy and psychological effort attempting not only to inspire loyalty in their players but obedience and respect too. Lose it and it's a tough job to win it back. Often impossible.

Emery's players very clearly know that the man who, since summer 2020, has been demanding total commitment and intensity from them was on the point of jumping ship. The only question is whether they have had their faith fatally shaken, or are as willing to forgive and forget as Villarreal's owner seems to be?

Vice-president Llaneza said this week: "Newcastle's interest in our coach, a man who devotes every hour, minute and second to our club, was a 'boom' which came at an inappropriate time." Inappropriate because Villarreal are underperforming and, despite the €35m they've earned from the Champions League thus far, the Roig family view it as imperative the club make it to the round of 16 and even greater revenue.

The underlying factor which should continue to buy Emery time is the fact that Villarreal often play very attractive, well-constructed football. It's just topped off by consistently daft mistakes at either end of the pitch.

It's important to note that Llaneza also thinks: "I still get p----d off as badly as ever, if we lose. I'll stay indoors for two days calming down. But what hurts most is when we should play good football but we're poor. That costs me to watch. Defeats? Yeah you hate them but they are part of the game but if we've played well and lost it's far, far easier to digest."

Which is just about where the Yellow Submarine -- shorn of their best player and goal scorer, Gerard Moreno, and victims of a constant injury list -- are right now. Playing nicely enough, but falling flat on their faces when it comes to winning.

Emery may have a comfort blanket of his employers' understanding when he argues: "We're playing well, we are putting in really interesting, really likeable performances -- just not scoring or winning. Yet." But nobody should imagine that the Roig family's patience at Villarreal is either endless or a bit soft-hearted. That's not how billionaires earn their billions.

The aforementioned Valverde was employed there some 12 years ago, but was sacked in January 2010 with the club ninth in LaLiga. Marcelino was a real guru at Villarreal, winning promotion, securing serial top-six finishes and a Europa League semifinal place. But he made one big misstep in the eyes of his employers and was sacked.

Even Emery's predecessor, the immensely popular Javi Calleja, having taken the Yellow Submarine to fifth, was ruthlessly removed so that the charge for a European trophy could begin under the Basque. Emery delivered, and that's a huge credit point for him, but the Newcastle affair put a dent not only in his image but in the strength of his relationship with the Roig family. Having had his fingers badly burned by the whole experience it's clear that Emery understands, with crystal clarity, that the grass isn't necessarily greener elsewhere.

On top of that record 10 scoreless draws since taking over, he's yet to defeat Atletico, Barcelona or Real Madrid -- something his predecessors often achieved. To get things back on an even keel, to restore faith, not least from his players, it's time Villarreal started turning draws (20 from 52 in LaLiga) into wins and time they had a substantial Copa del Rey run.

But first Emery will need to avoid defeat in Atalanta next week, and demonstrate to all and sundry that not only is he fully over his dalliance with the Premier League's bottom club but he's the man president Roig though he was when he hired him in summer 2020. Otherwise the billionaire's patience, forgiveness and gratitude will run dry. And we all know what happens then.