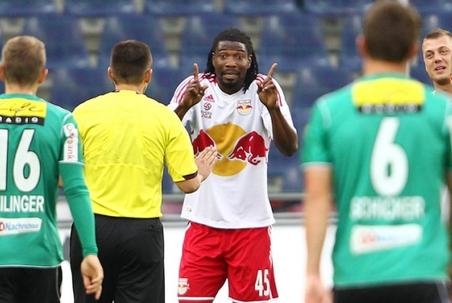 Ghana defender Isaac Vorsah has escaped stiff punishment in Austria as he has been banned for one match following the red card he received over the weekend.

The 24-year-old was sent off in his debut game for Red Bull Salzburg in their league match against Reid on Saturday.

The Austrian Football Federation has now slapped a one-match ban on the Ghanaian saying he prevented a clear goal scoring chance.

The disciplinary committee of the (AFF) says Vorsah was handed the one match "because he prevented an obvious goal-scoring opportunity."

The towering defender could have received a stiffer punishment if he was guilty of violent conduct.

Vorsah lasted only five minutes in his debut game for Red Bull Salzburg.

He was expelled after the foul on Reid striker Rene Gartler.

He will miss Salzburgâ€™s game against Austria Vienna on Saturday.