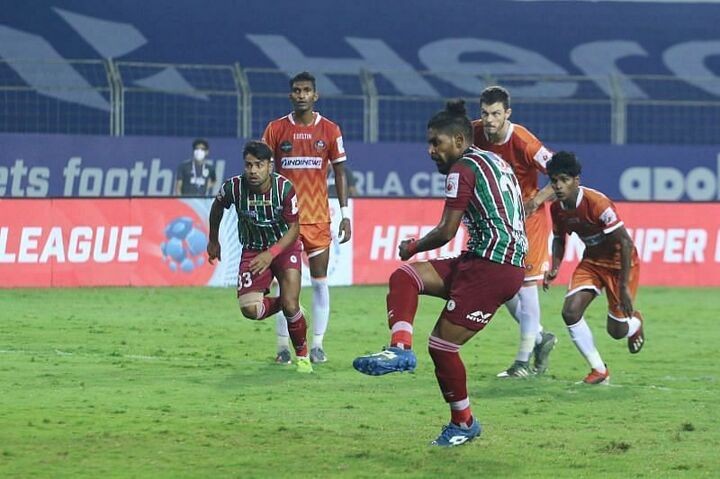 The ISL 2020-21 league season concluded this past weekend with Mumbai City FC clinching the League Winners Shield. They defeated ATK Mohun Bagan in the final league encounter by a 2-0 margin and claimed top spot in the ISL standings.

Both the Islanders and the Mariners were on equal points after 20 league matches but the former prevailed on account of a better head-to-head record. Mumbai City FC won both their matches against ATK Mohun Bagan in the ISL 2020-21 season.

Odisha FC had a dismal campaign this year and finished bottom of the ISL standings. They won just two matches, drew six and lost a league-high twelve matches.

However, Brazilian forward Diego Mauricio was the shining light in the Odisha FC squad. He scored 12 goals for the side and cemented himself as one of the most lethal attacking players in the league.

Mauricio had a penchant for scoring stunners for Odisha FC and capped off the ISL 2020-21 campaign with a goal in their thrilling 6-5 win over SC East Bengal.

FC Goa are widely known in the ISL to be one of the most attack-minded sides over the past few years. Despite losing their key man Ferran Corominas at the start of the season, they snapped up another gem in Igor Angulo.

Angulo did not take much to settle into the FC Goa setup and was on a scoring spree from the get-go in the ISL 2020-21 season. He consistently kept racking up his goals tally as FC Goa stabilized their campaign after a slow start.

The Spaniard impressed with his movement inside the box and ability in the air as well. He finished the league stage with a tally of 13 goals, falling just one short of the scoring leader.

ATK Mohun Bagan were one of the most clinical sides in the ISL 2020-21 campaign. They maintained their position in the top two of the league standings with impressive performances throughout.

Roy Krishna's lethal form in front of goal was one of the major reasons for their success this season. After leading the former ATK side to the ISL championship last year, Krishna continued his bright form for the newly formed ATK Mohun Bagan as well.

Krishna finished as the top-scorer at the end of the league stage with 14 goals.

NorthEast United FC underwent a phenomenal campaign this year as they finished in the ISL playoffs position. Despite a change of guard from Gerard Nus to Khalid Jamil, the Highlanders managed to stay on course to clinch a spot in the final four.

Federico Gallego was one of the key men for the Guwahati-based franchise. He missed a few matches earlier in the season but made a solid return into midfield. He managed to provide six assists and even scored a few goals which proved crucial for their qualification.

Mumbai City FC's big signing at the start of the season, Hugo Boumous, proved to be one of the fruitful ones. He played a pivotal role in the stacked Mumbai City FC attack.

With his lethal movement and silky smooth passing skills, he managed to accrue a total of seven assists. He was a key reason for the Islanders' dominance throughout the campaign.

Despite missing the last few matches due to suspension, Boumous will play a key role in the ISL knockouts for Mumbai City FC.

FC Goa's midfield was a very stacked one with a lot of talented players - Edu Bedia, Jorge Ortiz Mendoza, Lenny Rodrigues (before he moved to ATKMB), Brandon Fernandes, Princeton Rebello and Alex Jesuraj. However, Alberto Noguera made his presence felt with his fine passing skills.

Noguera was the engine of the FC Goa midfield with his movement and fantastic ball distribution skills. He managed to pick up eight assists in the league stage and was a major provider for Igor Angulo.