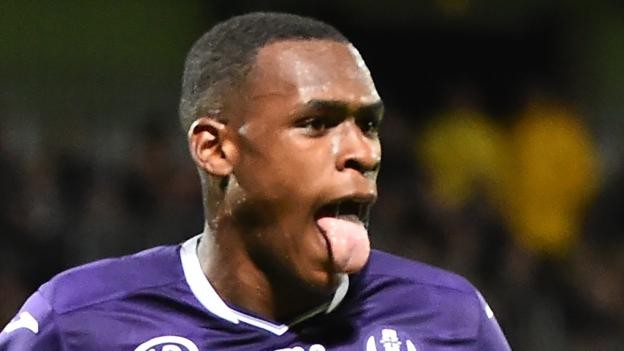 West Ham’s previous transfer record was Marko Arnautovic, who cost an initial £20m plus £5m in add-ons - not all of which have been met yet

The Hammers are also set to announce the signing of Swansea's Poland goalkeeper Lukasz Fabianski within the next 24 hours.

France Under-21 international Diop, 21, made 95 appearances for Toulouse.

"I hope to help the team win lots of games. I am very happy to sign for such a historic, English club, and I hope to show my best here."

Everton and Sevilla were also interested in Issa Diop

Diop made his Ligue 1 debut for Toulouse, his hometown club, in November 2015 - a 2-0 win over Nice - before scoring his first goal in a 3-0 victory at Troyes in his second French top-flight appearance.

He skippered the side for the first time in April 2017 before being appointed club captain in October of that year, leading the side to the quarter-finals of the French Cup.

He made 34 Ligue 1 appearances last season as Toulouse struggled, only avoiding relegation with a 4-0 play-off win over Ajaccio in May.

At international level, Diop scored in the 4-0 final win over Italy as France won the European Under-19 Championship in 2016.

"Issa is a player with fantastic potential who has already shown great quality at such a young age," said West Ham director of football Mario Husillos.

"We believe he is now ready to make the next step in his career by moving to the Premier League."

Fabianski next for West Ham?

Fabianski, who joined Swansea from Arsenal in 2014, told the Welsh club he wanted to leave after their relegation to the Championship.

The 33-year-old is part of the Poland squad at the World Cup in Russia.

The Hammers need a replacement for goalkeeper Joe Hart after the end of his loan spell from Manchester City.

West Ham are also interested in 25-year-old Brazilian winger Felipe Anderson, although there has been no agreement with Lazio over a fee.

The Hammers want to sign midfielder Javier Pastore, 28, from Paris St-Germain, but sources have indicated his salary is above the Hammers' pay scale.