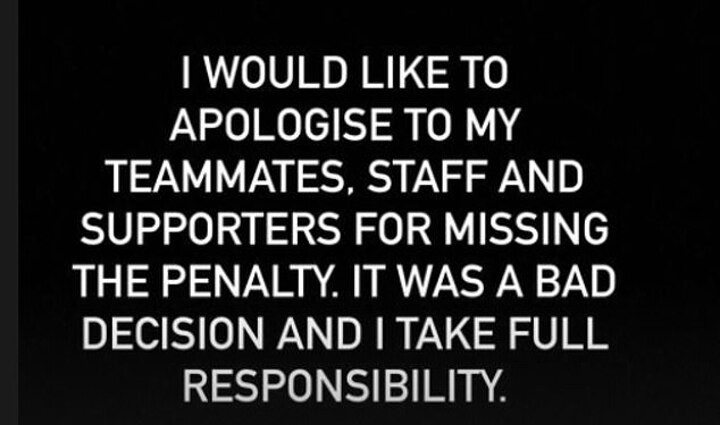 Sergio Aguero has apologised after his costly penalty miss against Chelsea at the Etihad on Saturday.

Manchester City would have secured the Premier League title had they won the match, but after Aguero's penalty miss were pegged back first by Hakim Ziyech, then Marcos Alonso in stoppage time.

Raheem Sterling gave the hosts the lead just before the break, and moments later the Argentine striker could have doubled the advantage but chipped an impudent, casual panenka down the middle and goalkeeper Edouard Mendy saved with ease.

Fans and pundits criticised the departing veteran for his miss, and in response Aguero admitted his contrition on his Instagram story after the match.

His post read: 'I would like to apologise to my team-mates, staff and supporters for missing the penalty.

'It was a bad decision and I take full responsibility.'

Despite the result potentially providing a psychological blow to the champions-elect ahead of their Champions League final against the same opponents on May 29, Guardiola has since backed his striker.

The Spaniard told Sky Sports: 'I have always said to him (Aguero), take one decision and take it full convincing, so he decided to do it this way. I have nothing to add.

'We will try the next time to score our penalty and that is all.'