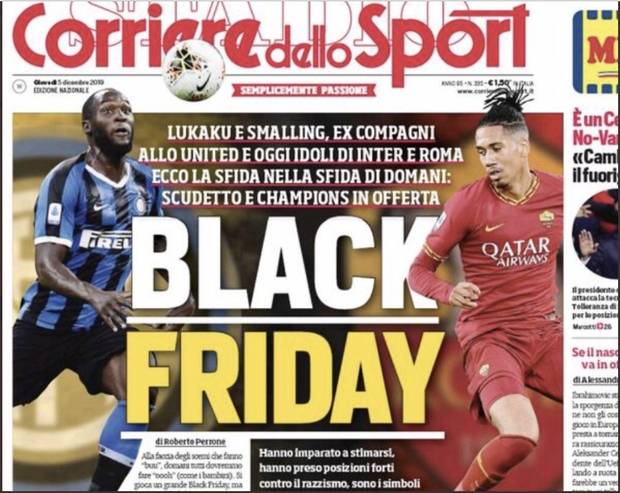 Another racist incident has marred the Serie A, the most recent in what seems to be a flood of these incidents. Every week, players of colour are abused and mocked, and the Serie A doesn't seem to care.

Racism has long been a problem in football, with leagues and organizations doing everything they can to eradicate it altogether.

Leagues and organizations that are not in Italy (or Eastern Europe) that is.

While the rest of the world tries desperately to remove this stain on the beautiful game, Italy seems to revel in it. Players of colour are routinely racially abused, to the point of walking off the pitch.

Mario Balotelli, who now plays for Brescia, was abused a few weeks ago by Hellas Verona fans. He was later ridiculed by his own team's president, who said he couldn't stay calm because "he is black, he can't lighten up."

Romelu Lukaku of Inter Milan has been subjected to monkey noises by Cagliari fans, Kalidou Koulibaly has had to defend his skin colour because of comments aimed at him during a match against AC Milan In another incident, a commentator said “the only way to out-muscle (Lukaku) is to give him ten bananas to eat."

A match between Atalanta and Fiorentina was suspended for a few minutes after Atalanta fullback Dalbert Henrique complained to the referees that he had been racially abused.

These are just a few incidents that have taken place over the past season or two. Numerous other players have suffered from this virulent plague of racism that grips Italian football.

And a plague it is, hate and fear spread by these diseased rats that call themselves football ultras. It is disgusting.

None of those incidents are one-offs, Balotelli has played most of his career in Italy, and has been on the receiving end of abuse throughout. Of course he's sick of it. Who wants to go out and be dehumanized by tens of thousands of people on a weekly basis? Who would put up with that for so long?

Cagliari, it seems, is a breeding ground for these plague-ridden rats. Blaise Matuidi, Sulley Muntari, and Moise Kean have been abused there in the past, as the anti-racist initiative Say No To Racism has pointed out. Sulley Muntari was actually booked and sent off for refusing to continue playing in that environment.

The Kean incident is of particular interest in highlighting Italian football's love affair with racism. Kean was hit was abuse while playing for Juventus at Cagliari. He ignored it, and then scored a few minutes later. Instead of celebrating, he turning to the home support and raised his arms in defiance. The crowd, which had been vitriolic before, almost rioted. After the game, Kean's own manager and teammates refused to stand with him. Leonardo Bonucci said it was a "50-50" thing between Kean and the fans, and then-Juve manager Massimiliano Allegri agreed, saying that Kean shouldn't have riled the crowd up.

Victim-blaming at its finest. Balotelli didn't mince words then, taking to Instagram to say “Bonucci is lucky that I wasn’t there. Instead of defending you he does this? I’m truly shocked.”

Going back to that Lukaku incident - if you thought that Juventus, Cagliari, Atalanta, and Verona were the only despicable organizations in the Serie A, you'd be wrong. Instead of supporting Lukaku, Inter's ultras released an open letter to the world, defending the Cagliari racist's behaviour.

“We understand that it could have seemed racist to you but it is not like that. In Italy we use some ‘ways’ only to ‘help our teams’ and to try to make our opponents nervous, not for racism but to mess them up. Please consider this attitude of Italian fans as a form of respect for the fact they are afraid of you for the goals you might score against their teams and not because they hate you or they are racist.

"True racism is a completely different story and all Italian football fans know it very well. When you declare that racism is a problem to be fought in Italy you just help the repression against all football fans including us and you contribute to create a problem that is not really there, not in the way that is perceived in other countries," the letter read.

Gee, thank you, so now we know that it's not just Cagliari, but all these clubs' ultras that are racist trash.

Italy's newspapers and magazines are no better, as AS Roma's English Twitter handle was quick to point out.

An Italian paper by the name "Corriere dello Sport" wanted to do something to mark the occasion of Black Friday - the Friday after Thanksgiving - and so they did the only, only, thing they could think of to link it to sports.

They put BLACK FRIDAY up in big letters, sandwiched in between Lukaku and Chris Smalling, because how else are we supposed to know what colour they're talking about?

Inter Milan were also quick to come down on this incident, even if their response didn't address the paper at all. They offered lip service, and little else.

Football is passion, culture and brotherhood.

We are and always will be opposed to any form of discrimination. #BUU #BrothersUniversallyUnited #NoToDiscrimination #FCIM

Props for the effort, guys.

In recent times, however, the Serie A teams seem to have found some spine. Their heads sat together and penned a letter outlining their dedication to eradicating racism in Italian football.

"Images of players being racially abused in Italian football have been viewed and discussed all around the world this season and that shames us all," they said.

"No individual should ever be subjected to racist abuse – inside or outside of football – and we can no longer stay silent on this issue or wait for it to magically disappear."

"We have to publicly recognise that we have a serious problem with racism," it added. "It’s a problem that we have not done enough to combat over the years."

They promised to introduce a "comprehensive and robust Serie A anti-racism policy, stricter new laws and regulations and a plan for educating those within the game about the scourge of racism."

This was last week, now let's wait and see if they'll actually follow through on that promise.

From what I've seen of them, I don't believe they will. Ultras control football in Italy, and as long as the ultras remain racist, Italian football will remain racist.

England came down hard on hooliganism in the 90s and 2000s, and Italy needs to do the same with its ultras. It'll be painful, and they will suffer for a bit, but at some point, they have to realize that ultras are ruining their sport, not enhancing it.