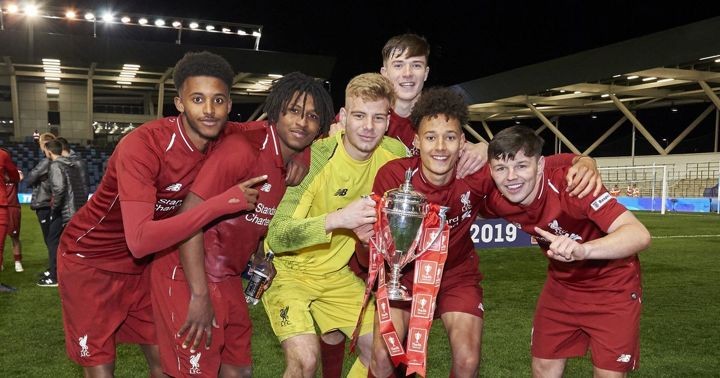 Liverpool have given the youngsters a chance during their 2019/20 season - most notably in the League Cup.

Perhaps we shouldn't be too shocked, though, given the youth team's exploits.

Here's what last season's victorious FA Youth Cup final squad have been up to since the Reds beat Manchester City on penalties.

Czech keeper Jaros has stayed with the under-23s this season, despite injuries to Alisson and Caoimhin Kelleher.

The 18-year-old made the first-team bench for the first time in January, during the FA Cup replay victory over Shrewsbury Town.

Williams has played five times for the first-team this season, making his debut in the 5-5 draw with Arsenal in the League Cup.

The Welsh teenager was also part of the young team that surprised Everton in the FA Cup third round.

Larouci featured a fair bit in pre-season, so it's no surprise to see him make the step up.

His senior debut came from the bench against Everton, while he was also involved in the 2-2 draw with Shrewsbury at New Meadow.

Centre-back Williams was sent out on loan to Kidderminster for the first half of the season, and impressed enough before Christmas to see the deal extended until the end of the campaign.

Kidderminster are in the bottom half of the National League North table, but have a better defensive record than teams much higher in the table.

Boyes scored a very unfortunate own goal in Liverpool's League Cup quarter-final defeat at Aston Villa, his competitive debut for the Reds.

The defender also featured from the bench in the aforementioned replay win over Shrewsbury, but was left out as a slightly stronger side lost to Chelsea in the FA Cup fifth round.

After staying on the bench in the League Cup draw with Arsenal, Clarkson made his debut as a substitute at Villa Park.

The 18-year-old made his first start, and his first Anfield appearance, against Shrewsbury.

Midfielder Sharif signed his first senior deal with the Reds in July, but suffered a setback when he injured his ACL over the summer.

Sharif is still on the recovery trail but is yet to feature in a Liverpool shirt this season.

Cain signed professional terms when he turned 18 in September, and has featured prominently in the UEFA Youth League this season.

He made his first-team bow against Shrewsbury, playing the full 90 minutes in the FA Cup replay.

German striker Glatzel put away the winning penalty in the 2019 Youth Cup final, but his first-team progress was delayed by an ACL injury.

Despite the injury, Liverpool signed him up to a long-term deal in September and he continues to work his way back to fitness.

The scorer of the goal which took the final to penalties, Duncan's future was the subject of intense debate over the summer.

Ultimately, after some much-publicised comments from his now former agent, the forward moved to Fiorentina for a seven-figure fee. However, he's still waiting to make his senior debut for the Italian side, who reportedly believe he needs a spell out on loan before he's ready for the step up.

The final member of Liverpool's starting XI against City, DIxon-Bonner made his debut from the bench in the Shrewsbury replay, replacing Clarkson late on.

He has also been on the bench for other first-team games, and played twice in this season's Football League Trophy.

Kelly was just 16 when he sat on the bench for the Youth Cup final, and the goalkeeper remains pretty far down the queue.

He has yet to feature for the Under-18s season, though he has been among the subs, with the likes of Jakub Ojrynski and Ben Winterbottom featuring more regularly.

O'Rourke, a striker, remains eligible for FA Youth Cup football and played for Liverpool in the third-round defeat at Spurs.

He also made his Premier League 2 debut this season, but is yet to score in the competition.

Savage played a Football League Trophy match for the first time this season, starting in the 5-2 defeat at Accrington.

The centre-back, who was an unused sub in last year's FA Youth Cup final, has also featured in that competition and in Premier League 2 this season.

Longstaff came off the bench against City in that Youth Cup final, and has made his first-team bow in 2019-20.

That came in the League Cup defeat at Villa, where he played 65 minutes, but has not added to that appearance.

Bearne was the other man to come off the bench against City, and the midfielder scored his penalty in the shoot-out.

He made his debut as a substitute for Longstaff against Villa, and also sat on the bench at Anfield as a young side beat Shrewsbury in their FA Cup fourth round replay.