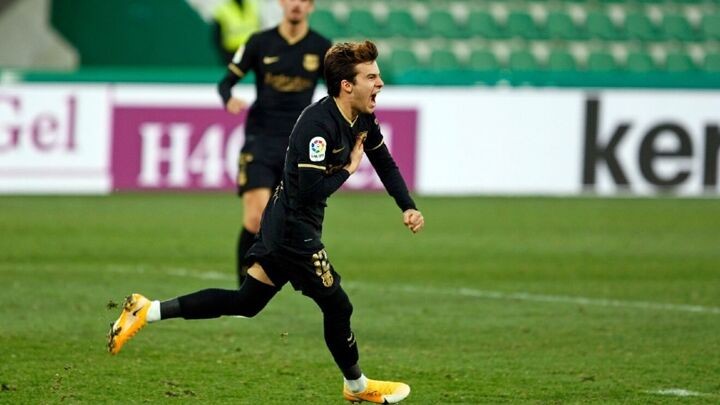 Riqui Puig is confident that this year will be his chance to shine as he enters his fourth season in the Barcelona first team.

The diminutive central midfielder has yet to fully establish himself at the Camp Nou, with Ronald Koeman even urging him to go out on loan in the previous two transfer windows.

But the 21-year-old has continued to fight for his place in the team and has been rewarded with two starts and a substitute appearance in pre-season.

Puig started against Nastic de Tarragaona and Girona and came on against Stuttgart as a second-half substitute, scoring a goal.

He made his LaLiga Santander debut for Barcelona against Huesca on April 13, 2019 and has always reiterated his desire to continue to fight for his place in the team.

Puig refused to leave last summer, even when Koeman said to him that he was surplus to requirements.

During the 2019/20 campaign Puig played 579 minutes in all competitions, and in the 2020/21 season he played just 593 minutes, starting only ten games in the two years, but his determination is evident.

Koeman has taken advantage of Barcelona's youth setup this pre-season, giving chances to the likes of Gavi, Nico Gonzalez, Yusuf Demir, Alejandro Balde and Rey Manaj, as well as Puig.

Barcelona may have to rely on the younger members of their squad this season as they continue with deal their perilous economic situation.

Miralem Pjanic is currently in talks with Juventus whilst Ilaix Moriba still hasn't renewed his contract, so Barcelona find themselves particularly light in the central midfield area.

Koeman may have to look to Puig this season should there be injuries to their best central midfielders: Frenkie de Jong, Sergio Busquets and Pedri.

Nico, Demir and Gavi will also be looking for an opportunity in the first-team squad.