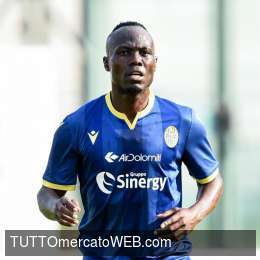 Hellas Verona midfielder Emmanuel Agyemang-Badu says he is working very hard to rediscover his best form during a question and answer session in the mixed zone after their win over Genoa on Sunday.

Badu replaced Algerian midfielder Sofyan Amrabat in the 90th minute during the Gialloblu 2-1 victory against Genoa at the Stadio Marc'Antonio Bentegodi on Sunday.

It was the Ghana midfielder's second game for the club since recovering from the pulmonary disease.

In August last year, before the start of the season, the 29-year-old was diagnosed with pulmonary microembolism- blood clots in his lungs.

The health scare sidelined him for six months where he received treatment to correct the problem.

In the wake of the game against Genoa, Badu spoke in the mixed zone where he touched on so many things including thanking the president of the club for standing by him during the difficult period.

"Now I have to forget everything, work very hard to help the team," Badu indicated.

What period was it for you? "It was tough for me and my family. I've never felt this for a player. Now everything went very well, I'm working hard to get back to the top and help the team."

Grateful to society? "The president is a special person. The sports director has always been with us, but it is also thanks to the coach. Now we have to think race by race because the championship is long but we can see that the team is doing well."

What do you think you can give to this group? "I'm fine. The team is fine, we are a nice group with a great coach. I just have to work and help the team to achieve the goal."

What idea did you have of the team? "The team is doing well but the public also deserves it."

Badu joined Hellas Verona from Italian rivals Udinese in the summer with and obligation to buy.