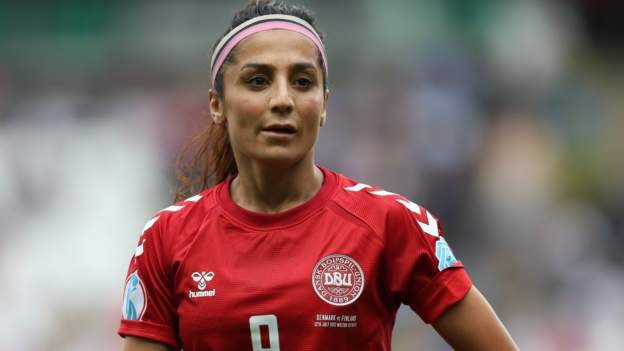 Pundit and Denmark forward Nadia Nadim paid an emotional tribute to her late mother as she returned to ITV's World Cup coverage on Tuesday.

Nadim, 34, had left ITV's coverage of the 0-0 draw between Denmark and Tunisia before full-time last week.

She later revealed her mother had died after being hit by a truck on the way back from the gym.

Speaking during ITV's build-up to the game between the Netherlands and Qatar, Nadim added: "She was a very strong woman who not only inspired me but a lot of people around her.

"Obviously I am sad but she raised us to be strong and I think this is how I will show her to be strong."

In a statement on Wednesdayexternal-link, Nadim called her mum, who was 57 when she passed away, "the most important person in my life".

Nadim said the reason she was returning to ITV's coverage was to make her mum proud.

"I know she wanted me to be here," Nadim said.

"I am here to make her proud and obviously have a mind on football and work and build something instead of laying at home and feeling sad for myself."

Nadim was born in Afghanistan and her family fled to Denmark after her father, an army general, was executed by the Taliban in 2000.external-link

She played for clubs including Portland Thorns and Paris St-Germain, and scored 38 goals in 103 games for Denmark.