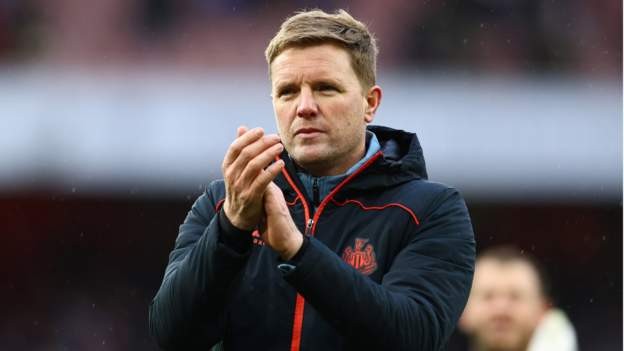 Only one team has stayed up in Newcastle United's situation - and head coach Eddie Howe admits "we need to get that win as quickly as we can" - so can the Magpies survive?

His side remain bottom of the Premier League - with no wins in 13 games - after a 2-0 defeat at Arsenal on Saturday.

Howe has only been in charge for two of them since replacing the sacked Steve Bruce. He watched last weekend's 3-3 draw with Brentford from his hotel room after contracting Covid-19, but he was at Emirates Stadium to see his side's battling display on Saturday.

One of the richest clubs in the world after their recent £305m Saudi takeover, Newcastle were five points adrift of safety before anybody else played this weekend.

Their next two games could go a huge way to deciding how their prospects look to potential new signings when the January transfer window opens.

They host Norwich on Tuesday and Burnley on Saturday - the other two teams in the drop zone.

"We just have to look at the first one [against Norwich]," Howe said. "Momentum in football is so important. We need to get that win as quickly as we can.

"I'm a positive guy. I've seen enough from the two games to see we can compete. A neutral watching today wouldn't think we were in the position we were in. It's up to us to get the results we need."

Newcastle are only the sixth team to fail to win any of their opening 13 Premier League games. Four of the previous five were relegated, with only Derby County in 2000-01 surviving.

There were some encouraging signs for Newcastle at the Emirates, with Jonjo Shelvey having a shot tipped on to the bar by Aaron Ramsdale in one of several Magpies chances.

Their 15 goals scored this season are more than three top-half teams, but they have conceded more goals - 29 - than anybody else.

Howe, who was relegated with Bournemouth in his last management job, has barely had time to work with his players yet as a result of contracting Covid.

Former West Ham striker Carlton Cole, who was watching the game for BBC Radio 5 Live, said: "I see better days coming for this Newcastle team. It hasn't gone their way today but they bought into it.

"Players will be playing out of position for them but Eddie Howe should be happy because they've tried their best today. It wasn't to be - they have to lick their wounds and hopefully they'll get a result in the week."

"I thought it was a good performance from us, especially at the start of the game. I thought for the first 30 minutes we were very good.

"I think the players have been very responsive and in my first two games have given everything for the team."

The game could have been very different if Newcastle had been given a penalty when Callum Wilson went down under pressure from Nuno Tavares. That happened moments before Gabriel Martinelli made it 2-0 - after Bukayo Saka had earlier opened the scoring.

Howe said: "The game was decided after the incident with Callum Wilson and the penalty. I know we were already a goal down but I think that was a real tough call against us. They then scored after that.

"I don't know why Callum would go down [if he wasn't fouled]. He was one-on-one, it was a great chance.

"There's a feeling that those big calls have gone against us and ultimately it had a big result on today."

Code Red: The race to save Raul Jimenez's life and his battle to returnShould historians be jealous? Josh Widdicombe's extraordinary family tree revealed