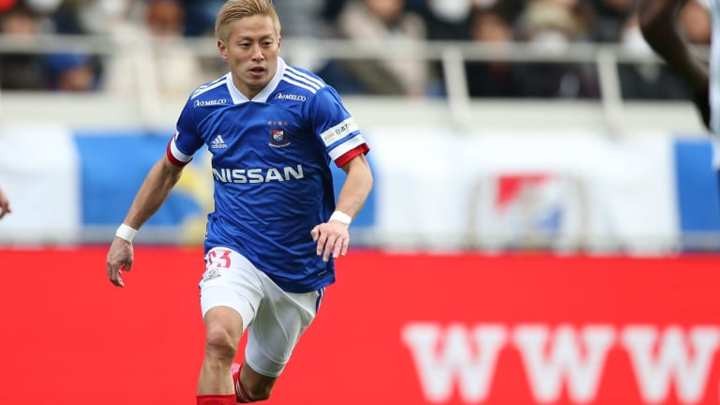 The raw statistics illustrate what an effective attacker Teruhito Nakagawa is. Indeed, the Yokohama F. Marinos No23 excelled throughout last year in helping his side seal the domestic title.

All the more notable was how the diminutive 1.61m Nakagawa - often deployed as a right winger - dazzled spectators through his consistency in front of goal and penetrating forward forays. Surging runs down the right flank right to the goal-line before finding a team-mate with an inch-perfect cross were commonplace.

In a sense, Nakagawa's style of play is reminiscent of similarly short players. And he was quick to reveal what inspiration he has drawn from them.

"I usually watch those great players who play in the same position as me," the 27-year-old told FIFA.com. "To name a few, players like [Lionel] Messi, [Mo] Salah, [Eden] Hazard and [Raheem] Sterling amaze me. I watch how they play, how they dribble past defenders and how they reach the best positions to shoot.

"And I like David Beckham. He was my idol when I was young. He had the confidence and aplomb to deliver the fatal strike when it mattered most. And he played in such an elegant way."

Born in Kanagawa, Nakagawa cut his teeth with Senshu University in 2013, scoring 15 goals in the JUFA-Kanto Division I League. The same year saw him feature in Japan squad’s at the Summer Universiade Kazan, where they won bronze.

Just as Nakagawa was being hailed as one of the country's hottest prospects, his career was dealt a severe blow. He suffered a serious knee injury in October 2014 and was forced to miss the remainder of the season.

Despite this setback, Yokohama proceeded to sign the young gun. The next couple of years saw Nakagawa work hard to restore his fitness and form of old. After spending two lacklustre seasons with Machida Zelvia and Avispa Fukuoka in J2 League, he exploded on the domestic scene when he returned to Yokohama in 2018. It began with their J.League Cup match against FC Tokyo in March that year, where Nakagawa provided the assist for the only goal.

"It was a turning point for me," he recalled. "I didn't have much playing time then but I worked hard and got myself ready. So I seized the opportunity when it finally came."

From there, he didn't look back, scoring nine times in 24 league appearances to be a key figure. Notably, Nakagawa scored one of the goals of the season with a lengthy run and finish against Consadole Sapporo en route to Yokohama ending a 15-year title drought.

Nakagawa received his first national team call-up last year, joining Hajime Moriyasu's squad for the 2019 EAFF E-1 Football Championship. He made appearances against Hong Kong and Korea Republic, but failed to find the back of the net as the Samurai Blue finished runners-up.

"I am not satisfied with my performances with the national team," he said, reflecting on his international debut. "It was a pity that we lost to South Korea. But I have learned a lot, such as how to build momentum and keep up our attacking momentum."

Japan are currently on the verge of sealing early progression in Asia's second round of qualifying for the FIFA World Cup Qatar 2022™. With his predatory talents, of course, Nakagawa is hoping to translate his domestic form to the international arena.

"It is one of my goals to play at the World Cup," he said. "I will work hard to make to the World Cup qualifying squad, and I want to help my team achieve good results through my goals and assists. I need to make further progress and become a better player."