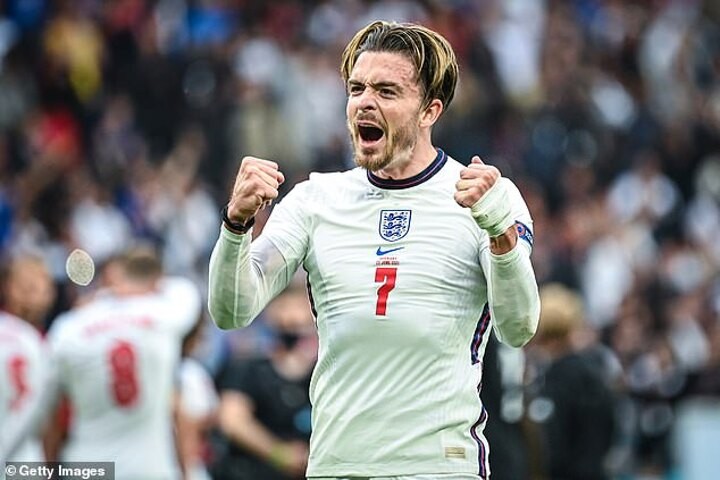 Jack Grealish's journey to becoming the first £100million British footballer has featured plenty of maverick genius on the pitch and a fair sprinkling of controversies off it.

The 25-year-old England star, who has signed for Premier League champions Manchester City ahead of the new season, has long thrilled crowds with his trickery and ability to play a defence-splitting pass.

But he's also made headlines for the wrong reasons, from being pictured inhaling hippy crack to lying passed out on the street during a drunken night in Tenerife.

Only last year, he broke Covid lockdown rules to party at a former team-mate's flat before crashing his £90,000 Range Rover.

His love for now former club Aston Villa has made Grealish a target too - in a March 2019 match against bitter rivals Birmingham City, he was attacked on the pitch by an opposition fan.

None of that has stopped Grealish, who became very much the people's favourite during England's recent run to the final of Euro 2020, earning a move to the most successful club in the country at the moment.

He has dazzled for his boyhood club Villa for several years but joining City represents a sizeable step up.

For the first time, Grealish will play in European football's premier competition, the Champions League and stands to earn a huge salary in the region of £230,000-per-week.

The silky player who rolls his socks down to his ankles after being inspired by legend George Best, almost inviting opponents to kick his shins as he dribbles past them, is likely to swell his medal collection very quickly.

Grealish is well accustomed to the pitfalls of life in the limelight with his family and girlfriend Sasha Attwood, a model, helping him focus on giving his best on the field.

Attwood, 25, revealed recently she received a barrage of '200 death threats a day' on social media as her partner played for England at the Euros.

They started going out when in secondary school and have recently rekindled their relationship after what was described as a 'rocky patch.'

Grealish was born in Birmingham to mother Karen and father Kevin, growing up in nearby Solihull with younger siblings Kevan, Kiera and Holly.

But there was family tragedy as well. Jack's younger brother Keelan died from sudden infant death syndrome in April 2000 at the age of nine months.

Dad Kevin said: 'Jack was only a kid himself back then, but he still remembers Keelan and he still thinks about him with everything he achieves.'

The family being of Irish descent, the young Grealish played Gaelic football for a local club in Warwickshire and once scored a point at the sport's spiritual home of Croke Park in Dublin.

But it was the more common form of football that drew Jack in from a very young age. There was never any doubt he'd be a Villa fan, either, given that every member of his family were die-hard fans of the Birmingham club.

Perhaps it was destiny - after all, Jack's great-great-grandfather on his mum's side, Billy Garraty, was also a footballer and helped Villa win the FA Cup back in 1905.

A picture of Garraty hung in the family home and no doubt offered inspiration as Grealish's love for the game grew.

Even at the age of four, Grealish would have the ball glued to his feet and in 2001, aged six, he joined local club Highgate United Youth.

'Jack had been playing with his cousins who were a year older,' dad Kevin recalled to the Birmingham Mail. 'He was the youngest of the lot and always player with the year above because he could handle it.

'Jack played one season for Highgate and that was it.'

Grealish was spotted by the Villa scout Jim Thomas while playing on Tythe Barne Lane playing fields in Shirley. The young lad in the oversized, bright orange Highgate kit stood out a mile.

'As soon as I'm there he's got the ball in his own penalty area and dribbled right the way through the team. He was very small but it was like looking at Maradona!' Thomas told BirminghamLive in 2019.

'There was a lady walking around with a pushchair, a pram, and it was his mother Karen. I said, "I've come to have a look at your son, would he like to come to Villa?"

'She puffed out her cheeks and said, "I'll say he would!"

Even at the age of six, it must have been a dream come true for the young lad who'd stand outside Villa's training ground to try and get a photograph with his idol Paul Merson.

Villa never had any doubt about his potential and even named him on the substitutes' bench for a Premier League game with Chelsea in March 2012, when he was only 16.

A big breakthrough in Grealish's career came when he helped Villa's under-19 team win the NextGen Series in Como, Italy in 2013, beating Sporting Lisbon and Chelsea along the way.

A loan spell at League One club Notts County during the 2013-14 season proved valuable in bridging the gap between youth and men's football.

And the moment this lifelong Villa fan had dreamed of arrived when he made his first team debut against Manchester City in May 2014.

The following campaign proved to be a breakthrough one for the 19-year-old as he played regularly and even started in the FA Cup final, which Villa lost to Arsenal.

But there were setbacks. In April 2015, a newspaper published pictures from six months previous allegedly showing Grealish inhaling nitrous oxide, or 'hippy crack', with friends.

His manager Tim Sherwood said: 'He is now in a responsible position as a professional footballer, he's got to make sure it won't happen again, he's assured me it won't.'

Yet two months later, pictures appearing to show Grealish lying on the street in Tenerife, apparently unable to move after a heavy night of drinking and surrounded by cigarette packets.

It was another lesson for the teenager that he was now constantly in the public eye and high jinks that are to be expected of many 19-year-olds would be subjected to closer scrutiny.

Early in the following season, with Grealish's stock rising rapidly within the game, he had to make a difficult choice over his international allegiance.

He was eligible to play for England through birth and also the Republic of Ireland through his family's heritage. Grealish had played for Ireland's youth teams up to under-21 level.

Ireland manager Martin O'Neill had tried to call Grealish up to the senior squad for a friendly match against England and a European Championship qualifier against Scotland.

Had Grealish played in the competitive match against Scotland, he would have been committed to Ireland for the remainder of his career, but he turned down the invitation and announced in September 2015 he would represent England.

It would still be another five years before he actually made his senior debut, however, the first of 12 caps now won under Gareth Southgate's management.

'It was not an easy decision as Ireland has a special place with me through my family,' Grealish explained. 'But I have decided to represent the country of my birth.'

In the following seasons, which saw Villa relegated from the Premier League and endure three years in the second-tier Championship, Grealish continued to excel and win plenty of admirers.

Pundits and fans alike swooned over his classy style of play and, finally, in the 2018-19 season, Villa were able to win promotion back to the top division via the play-offs.

During an away match at rivals Birmingham City in March 2019, Paul Mitchell ran from the stands at St Andrew's and hit Grealish on the side of the head.

Grealish was unharmed and, indeed, would later shrug off the incident by scoring Villa's winning goal, with Mitchell later sentenced to 14 weeks in jail after admitting assault and pitch encroachment.

It wasn't long afterwards that Grealish was made Villa captain and he made the step up to Premier League class look effortless.

The Covid-19 pandemic interrupted the season, however, and Sportsmail broke the story in March 2020 that Grealish had broken lockdown rules by going to a party at the flat of former Villa team-mate Ross McCormack in Solihull.

Magistrates heard how Grealish, still unsteady on his feet and wearing odd shoes, then got behind the wheel of his expensive Range Rover the following morning and crashed it into two vehicles and a wall.

He fled the scene, leaving the damaged vehicles behind before police arrived.

Grealish was banned from driving for nine months and fined over £80,000 for that incident and another in October 2020, having issued a video apology on Twitter the day after the incident urging people to follow the guidelines and stay at home.

None of that stopped Grealish enjoying another great season for Villa and ultimately winning a call up into the England squad for the European Championship.

England fans sang 'Super Jackie Grealish' to urge Southgate to bring him on in games when the team were struggling to unlock an opposition defence.

His moment arrived in the last-16 match with Germany when he played a direct role in England's two goals after coming off the bench with 22 minutes to play, sending Wembley into delirium.

Grealish's £100m departure to City hasn't gone down well with some Villa fans but the majority appreciate his years of service to his beloved club and that this is the perfect moment to take the step to a higher level.

Now at England's strongest team, representing his country regularly with a World Cup coming up next year and with his prime years still ahead, Grealish has come a long way from the small lad in the Villa top who even aged six dazzled with the ball at his feet.