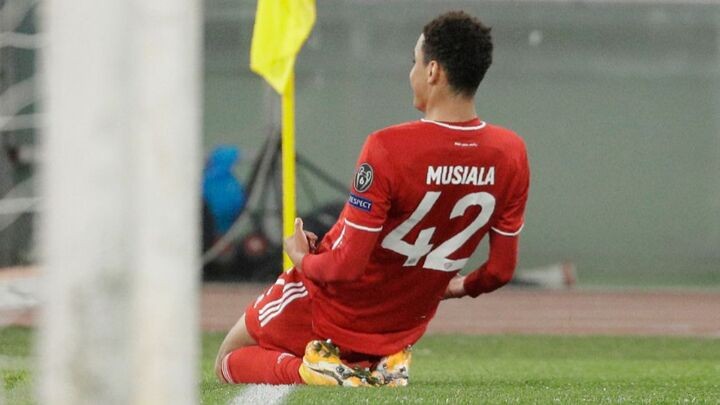 After showing what he can do in the Bundesliga, Jamal Musiala announced his arrival on the European stage during Bayern Munich's trip to play Lazio.

The 17-year-old scored the visitors' second goal at the Stadio Olimpico in the first leg of the last 16 of the Champions League.

The forward is enjoying a breakthrough season at Bayern, having made 18 appearances and scored four goals so far.

There are questions over his international future, though. Musiala was born in Stuttgart, Germany, in 2003 to an English father with Nigerian descent and a German mother.

He spent his childhood in England, where he went to school, and was part of the academies of both Southampton and Chelsea.

Musiala has represented England at youth level, from U15s to U21s, but also played for Germany at U16 level.

Despite his attachment to the England set-up, Musiala is expected to be handed a senior call-up by Germany boss Joachim Low in March and could make his debut for the 2014 world champions in a friendly against Iceland.

As well as that, Bayern are expected to announce that the youngster has signed a new and improved contract at the club once he turns 18 on Friday.

Musiala's goal against Lazio at the age of 17 years and 363 days makes him the second youngest goalscorer in Champions League history, behind Bojan Krkic (17 years and 217 days).