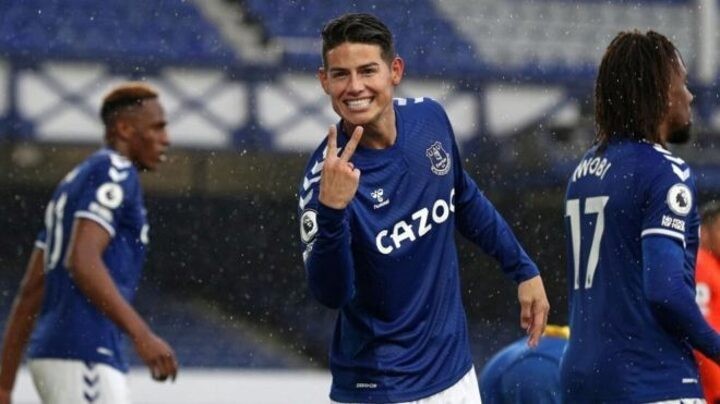 The last few years of James Rodriguez's career have been hampered by injuries. Whether at Real Madrid or Bayern Munich, fitness problems always got in the way of more consistent playing time and performances.

During his time at the Estadio Santiago Bernabeu and Allianz Arena, James would often return from international duty with an issue, giving him a certain reputation of being injury prone.

Now, at the age of 29, the Colombian seems to be enjoying a new lease of life at Everton. Having been released from Zinedine Zidane's clutches, he's playing regular football and performing at a high level.

After a difficult pre-season, James has hit the ground running in the Premier League with Carlo Ancelotti's side, starting each of their five matches - finishing two and lasting at least 78 minutes before being substituted in the other three.

In total, for Everton and Colombia, James has played 676 minutes so far this campaign. Some 164 of those minutes came in the October World Cup qualifiers against Venezuela and Chile.

In previous years, it would've been inconceivable to see James play the full 90 minutes for his club, as he did against Liverpool on Saturday, straight after returning from international duty.

Back at Real Madrid, Zidane is struggling to keep all his players fit. Casemiro, Fede Valverde and Ferland Mendy all started on the bench against Cadiz after going on international duty. Luka Modric was substituted at half time of Saturday's defeat, too.

Meanwhile, at Goodison Park, James played the full match as Everton held Liverpool to a 2-2 draw in a pulsating encounter on Merseyside. The Colombian is now responding to the physical demands being made of him by Ancelotti and the Everton coaching staff.

Whether it's a change of method or mentality, James is revitalising his career in England, looking after his body in the process.