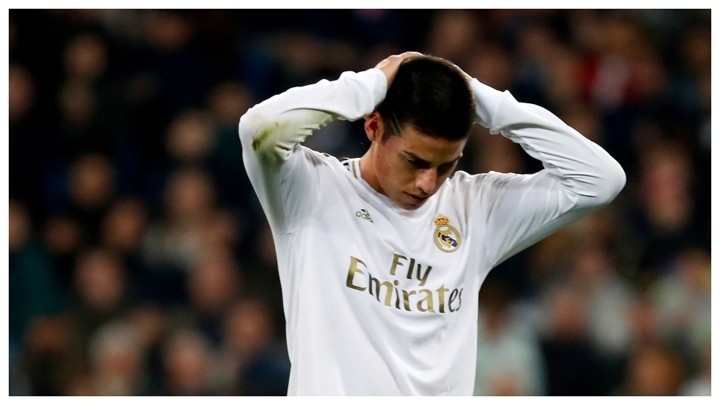 When Real Madrid return to action against Eibar on June 14, James Rodriguez will start yet another challenge at the club, and possibly his biggest yet.

You have to go back as far as October 19, 2019, for James' last appearance in LaLiga Santander, when Real Madrid lost 1-0 at Son Moix.

From then, he didn't manage a single minute in the 18 games that followed and, if he doesn't feature against Eibar, a whole half-season will have passed without him playing.

Of those 18, 10 were lost through injury, he failed to make Zinedine Zidane's matchday squad on four occasions and then he watched on from the bench four times.

The additional substitutes will crack open a window for the Colombian to sneak through, but the early signs aren't so positive.

It has to be remembered that Zidane has no faith in James; he wanted him sold last summer and was disappointed that the move to Atletico Madrid didn't materialise.

Despite the lack of trust, Zidane afforded him some opportunities early in the season, but those stopped in Mallorca and from there, James was barely thought about.

Only he and Alvaro Odriozola, who left in January, haven't played a single LaLiga Santander minute since that game in October.

As if the lack of faith wasn't a big enough factor, that Zidane will be able to call upon Marco Asensio, Karim Benzema and Eden Hazard is just another setback. That was his preferred attacking trio in pre-season, although that plan fell apart with the Spaniard's injury against Arsenal.

James, now, is probably behind even Rodrygo Goes and definitely behind Vinicius Junior.

He may not be a forward, but in the battle with Isco as the attacking midfielder, there's no debate to be had - James has lost.

There's no way he'll fight his way ahead of either Toni Kroos or Luka Modric either, making the front line his only option.

With the market filled with uncertainty, one guarantee is that Los Blancos will look to shift James this summer.

The 28-year-old cannot afford a third season on the periphery, and he'll surely be desperate to move on as well.