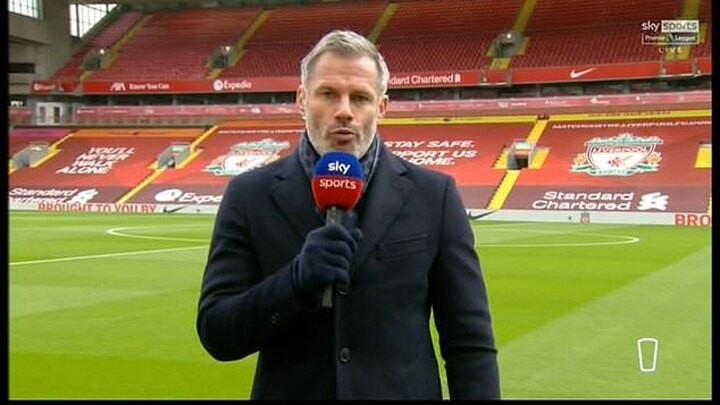 Despite being well off their scintillating best, the Reds are still strong contenders for top honours this season as they host Ole Gunnar Solskjaer's resurgent Red Devils at Anfield.

Klopp has ramped up the mind games in the build up to the mammoth contest, while Solskjaer has claimed there is no better time to end Liverpool's four-year unbeaten run at Anfield in the league.

And former Reds defender Carragher says the pressure is well and truly on the champions to establish their title credentials against their hopeful rivals.

'I think it [the pressure] is on Liverpool, I think more eyes will be focused on Liverpool,' Carragher said on Sky Sports. 'They won’t want to be going 6 points behind Man United at this stage of the season.

Meanwhile, Roy Keane delighted in United's upturn in form after a nervy start to the season, but still expressed concerns about his former side's defence and goalkeeper, David de Gea.

'It’s been such a bizarre season, if they win today they will have a different mindset but I still have my doubts about United defensively and with the goalkeeper but I’d be delighted if they proved me wrong,' he said on Sky Sports.

'It’s never easy going to Anfield no matter the situation but they shouldn’t be fearful. I hope united turn up and have a go at them, as much as I’m worried about United’s defence Liverpool have been shaky.

'The last few days you feel it, I live in Manchester, this game doesn’t need us to add to it. It’s a huge game, considering where they were last season to get a win or even a draw wouldn’t be the end of the world. Its set up for a brilliant game.'

'Someone has got to go and beat Liverpool here. It’s been almost four years which is unbelievable but if Manchester United have aspirations to win a title they have to come here and win at some stage and why not today?

'It will never be a better time. I agree Liverpool will come out absolute animals but if United can handle that then why cant Manchester United feel they can score goals?'