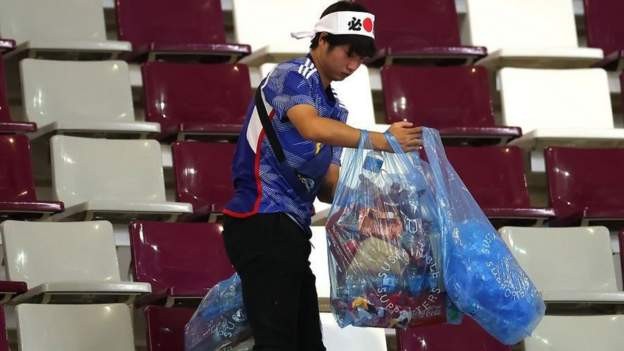 The magnitude of their win over Germany could have seen them go off into the night in celebration but Japan's fans demonstrated that the best manners and habits are ingrained, no matter the situation.

Come full-time, the stands of sporting stadia are usually littered with used food trays and wrappers and empty drinks cups, left behind for someone else to clean up.

But not when the Samurai Blue are in town.

Their players, fresh from a 2-1 victory over the four-time champions in their World Cup opener, had barely left the pitch when the Japanese in the crowd pressed pause on the party to tidy up after themselves at Khalifa International Stadium in Qatar.

They did the same at the World Cup in Russia four years ago, most notably after a 3-2 defeat by Belgium in the last 16, and again in the 2022 tournament opener between hosts Qatar and Ecuador on Sunday - a match their team wasn't involved in.

In Japan, cleanliness is a part of the culture and is drilled into its people from early childhood.

In 2018, Scott North, a professor of sociology at Osaka University, told the BBC that tidying up is a way Japanese people "demonstrate pride in their way of life".

"Cleaning up after football matches is an extension of basic behaviours that are taught in school, where the children clean their school classrooms and hallways," he said.

Japan play Costa Rica in their next Group E fixture on Sunday, followed by Spain on Thursday.

But even if they don't win the World Cup, their fans are already winners.