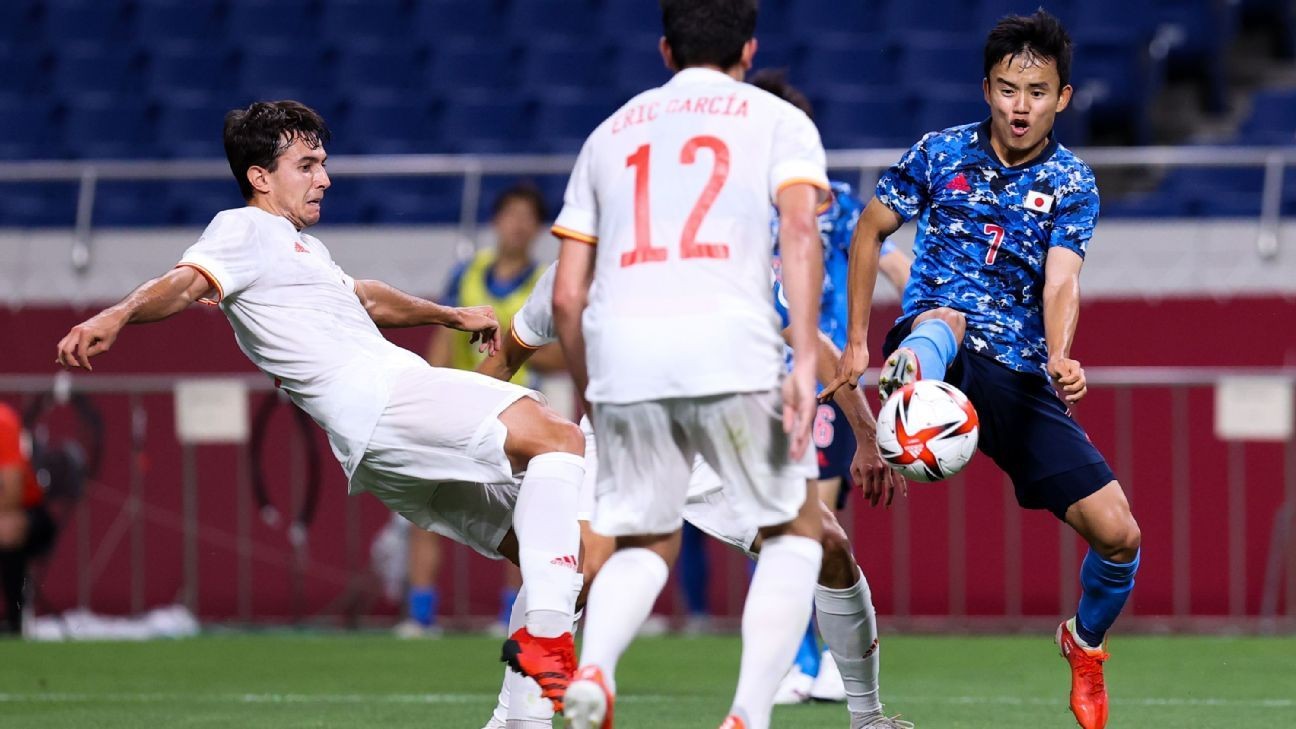 Japan's bid to win Olympic gold in the men's football competition on home soil has come to an end, after a 1-0 extra-time defeat to Spain in the semi-finals of the Tokyo Games.

Having spent the entirety of the regulation 90 minutes -- and much of the additional 30 -- frustrating the Spanish, it initially looked as though the Samurai Blue had done enough to take the game to penalties, where they would at least stand a 50-50 chance of prevailing.

But with five minutes remaining, Real Madrid star Marco Asensio finally found the breakthrough with a sublime effort to book Spain's place in the gold medal match, where they will meet a Brazil side which required the shootout to see off Mexico in the day's other semi-final.

There was no certainly no shame for Japan in losing to a talented Spain side boasting six players who recently featured for the senior team in their run to the Euro 2020 semi-finals.

And, as much as Japan have been brilliant all tournament long, few would argue that Spain were not deserving winners given they were largely the better team throughout the match.

Goalkeeper Kosei Tani produced a valiant display in Japan's 1-0 semi-final loss to Spain in the semi-finals of the Tokyo Olympics men's football competition, but could did little to keep out Marco Asensio's sublime winner. Francois Nel/Getty Images

Having created the more clear-cut chances of the two teams, Spain could have sewn up the tie earlier were it not for some valiant defensive displays from the hosts.

Goalkeeper Kosei Tani repelled almost everything that was fired his way, while centre-back Ko Itakura put his body on the line with no regard for his own wellbeing.

In a challenge that initially saw Spain awarded a penalty, replays showed Maya Yoshida producing a superb last-ditch tackle that denied Rafa Mir what would have been a certain goal -- with the Video Assistant Referee agreeing by overturning the original decision.

The amount of desperate defending the Japanese were required to do further emphasised how Spain were ultimately worthy of their place in Saturday's final.

While Japan have come up short in their quest for gold, all is not lost with a bronze medal still up for grabs against the Mexicans, who they have already beaten once earlier in the group stage in a 2-1 win.

A crestfallen Maya Yoshida was part of the Japan side that finished fourth at the 2012 London Olympics, and will be looking to do on better at the Tokyo Games by claiming the bronze medal in Friday's third-place playoff. Clive Brunskill/Getty Images

Since the Olympics men's football competition became an under-23 competition in 1992, the Japanese have never stepped up onto the podium -- with their standout performance a fourth-place finish at London 2012.

Even going back to when the Games still featured senior teams, a bronze medal in 1968 was the best they have ever achieved.

At the very least, the current side can equal Japan's finest accomplishment at the Olympics, which should be enough motivation to overcome Tuesday's disappointment and produce one more stirring effort on Friday.