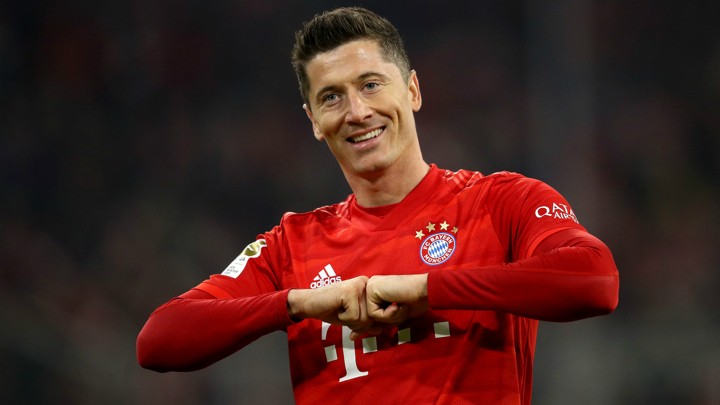 Javi Martinez has labelled Robert Lewandowski an "animal", but insisted he never feared the Bayern Munich star would leave for Real Madrid.

Lewandowski is enjoying another prolific season with the Bundesliga giants, scoring 43 goals – equalling his best in a single campaign – in 37 games.

The 31-year-old has been linked with a move to Madrid previously, but is instead in his sixth term with Bayern.

"He is in the best year of his career," the midfielder told Marca.

"He is an animal, the best No.9 in the world. Keep it that way until August."

Asked if he ever worried Lewandowski would join Madrid, Martinez said: "Not fear, because great players have left Bayern and they have always replaced them well.

"It is clear that it would have been a great loss, but it didn't happen."

Martinez arrived at Bayern from Athletic Club in 2012 and has won seven top-flight titles and a Champions League among numerous trophies with the German giants.

The 18-cap Spain international is out of contract next year and said he was ready for whatever was next in his career.

"I have to sit down and talk to Bayern. It expires in 2021. I'm ready for anything. What I have experienced here has been great," Martinez said.

"We have to wait because there is a lot of uncertainty. We don't know if there will be a market, if the Champions League will be played."

It could be that Martinez finds himself tempted to take on a completely new challenge, with the option likely to be there for him to head for any corner of the world.

“If that happens, I am open to everything,” he added.

“My idea is that I want something that fulfils me from a sporting and individual perspective. It can be playing and living in the United States, in Australia, going back to Spain. I think I still have a lot of football left in him.”

Pressed further on whether he could return to his roots at Athletic, Martinez said: “Everything is possible.

“In Bilbao I lived six incredible years. Of course that option is always there.”