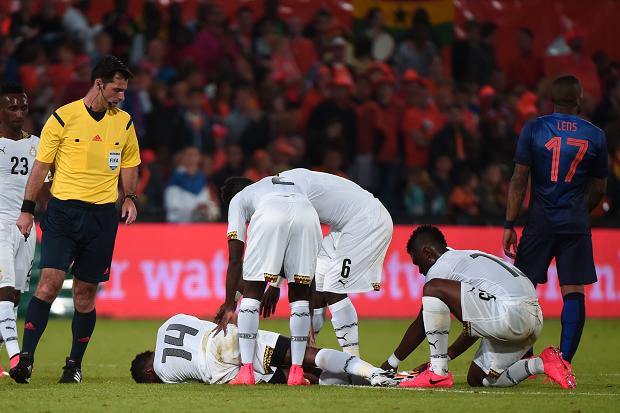 Sister of Ghana defender Jerry Akaminko, Fanny, has dismissed suggestions her brotherâ€™s injury was caused by spiritual machinations of his detractors.

The Turkish-based defender suffered an ankle injury which ruled him out of the 2014 World Cup in the friendly defeat to the Netherlands over the weekend.

Akaminko has worked extremely hard all-season-long at Ekisehirspor to earn a return to the Black Stars team after an extensive snub after the 2013 Africa Cup of Nations.

The 26-year-old is set to undergo surgery in New York and will be on the sidelines for at least three months.

Rumours has it the ex Heart of Lions defenderâ€™s injury was as a result of spiritual machinations of his ex agent whom he refused to show gratitude to after his big money move to Ekisehirspor.

But the sister of the Turkish-based defender refuses to give in to these claims of spiritual machinations against his brother.

â€œMy brother is highly fortified spiritually. He has been visiting the church constantly since his return from Turkey and before he joined the Black Stars camp.

â€œSo I only believe he got injured and that was it. I donâ€™t want to buy into suggestions that someone has worked against him in that regard.â€