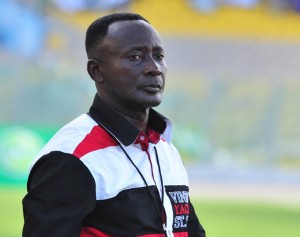 Mighty Jets coach Jonas Amissah has conceded his tactics against Hearts of Oak on Sunday on cost them a win.

Jets have now picked up only one point out of a possible six and Amissah admits things have to change immediately to avoid another relegation dog-fight.

"Our tactics today failed us, nothing went going for us especially in the first half," he told GHANAsoccernet.com

"Having said that, I would want to give credit to Heartsâ€™ bench for playing a good game which now leaves us to make corrections ahead of our next game.

"Only one point from two games is not too good and we are not happy about it that is why we had a meeting after the game, things needs to change for the better starting from our next match."

Mighty Jets will next battle in a must win game against Wassaman otherwise another season of battling relegation looks well on the cards for Jets this early.