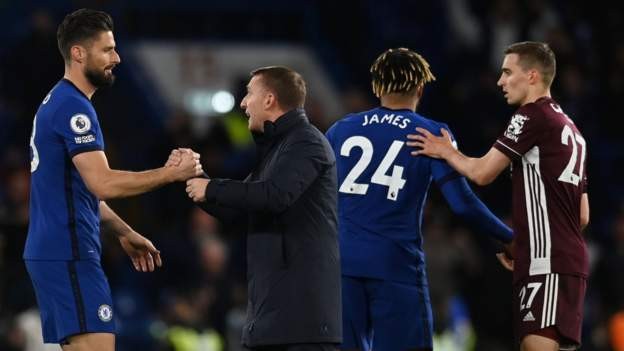 Chelsea manager Thomas Tuchel warned his side "the job is not done yet" - but is this deja vu for Leicester City?

Tuchel's side beat the Foxes 2-1 to boost their hopes of qualifying for next season's Champions League - four days after Leicester beat Chelsea 1-0 in the FA Cup final.

"It was a strong performance and well deserved performance," Tuchel told BBC Sport.

"[This is] no time for celebration, the job is not done yet, two more games to go. We're very happy to play in front of supporters, it was a huge difference today."

Chelsea's top-four hopes are now in their own hands but Leicester are in real danger of dropping out of the top four late in the season again.

Liverpool and Leicester could be separated by goal difference if they win their games - although the Reds have the edge.

If Liverpool beat Burnley and Crystal Palace by one goal each, Leicester would need to beat Tottenham 3-0 on the final day. They would need to win by more if the Reds get bigger victories in either game.

If either the Clarets or Eagles deny the Reds, then it is still in Leicester's hands.

Why does this feel familiar for Leicester?Leicester City manager Brendan Rodgers says his side conceded a "very very harsh" penalty

There are huge similarities between last season and this campaign for Leicester, who have spent a large period of those two years in the top four places.

When football paused because of the first Covid lockdown, Leicester were eight points clear of fifth place.

They would only win one of their nine games after the Premier League restarted and dropped out on the penultimate day.

This season at the same stage they were also eight points above fifth place (and 13 above Liverpool, who had one game in hand).

If Liverpool beat Burnley on Wednesday, the Foxes will again drop out of the top four on the penultimate round of games.

"We said it all along, the players have had a great season but it would have to be after 38 games," said Foxes boss Brendan Rodgers.

"We have to get the points on Sunday then see where we are. If we don't get in the Champions League it has still been a great season."

The FA Cup win would, of course, make this season's potential collapse easier to take - it still makes it the second best season in Leicester's history.

Chelsea get the win they really needed?

Saturday felt like the bigger game for Leicester, who had never won the FA Cup before. But Chelsea, who have won that cup six times since 2000, are more reliant on a Champions League finish.

"You want to win every final. The game was so big that we couldn't have so much things in our head about the final because we had to concentrate on this game," Chelsea striker Timo Werner told BBC Sport.

"It was much more important because when you don't play Champions League next season it means a lot."