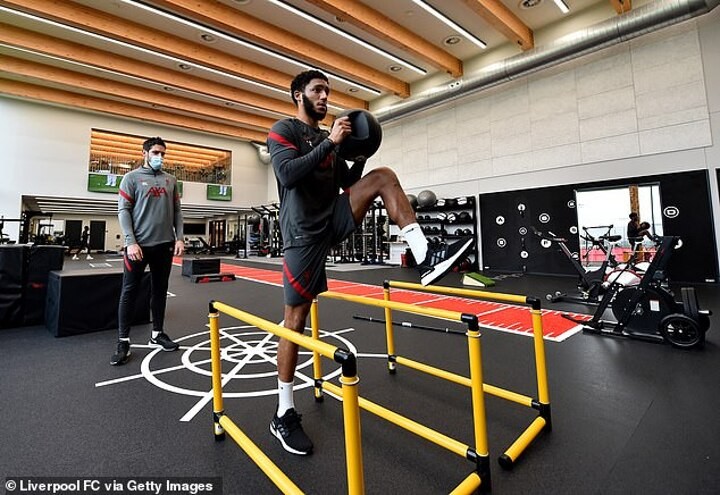 Joe Gomez has taken big strides towards overcoming a troublesome knee injury as he was put through a rigorous workout at Liverpool's AXA training facility.

Gomez has not featured for the Reds since November 8 after sustaining a serious knee injury while on international duty with England.

He required surgery to fix the issue with his knee tendon and was expected to miss the remainder of the 2020-21 season. But photos have emerged of Gomez moving well in the AXA training ground gym as he builds strength back up in his knee.

Gomez was pictured doing some light weight training as well as spells on an exercise bike to test the strength in the knee.

A workout in the swimming pool also became part of the workout session with a member of Liverpool's strength and conditioning team.

It represents a major boost to the Reds, coupled with Virgil van Dijk's improvement as he recovers from an injury sustained in the Merseyside derby earlier this season.

Van Dijk is slightly ahead of Gomez having been able to begin some work with the ball and Klopp admitted recently that the Dutchman's recovery is 'really promising'.

Klopp refused to categorically say Van Dijk wouldn't play again this season but admitted he didn't know when he would actually return.

'I don't know what is possible and I don't think I am the right person to judge it,' said Klopp.

'He looks really good and I've spoken to him. He is in a good mood but I don't know when he'll be back. I had this injury myself but for the time we are in and how long he is out, he looks really promising.'

Gomez and Van Dijk established themselves as Liverpool's first choice centre back pairing and their injuries so close together proved damaging in the Reds' bid to defend their title.

Midfielders Fabinho and Jordan Henderson have had to deputise in a number of games this season, including in the 0-0 with league leaders Manchester United.