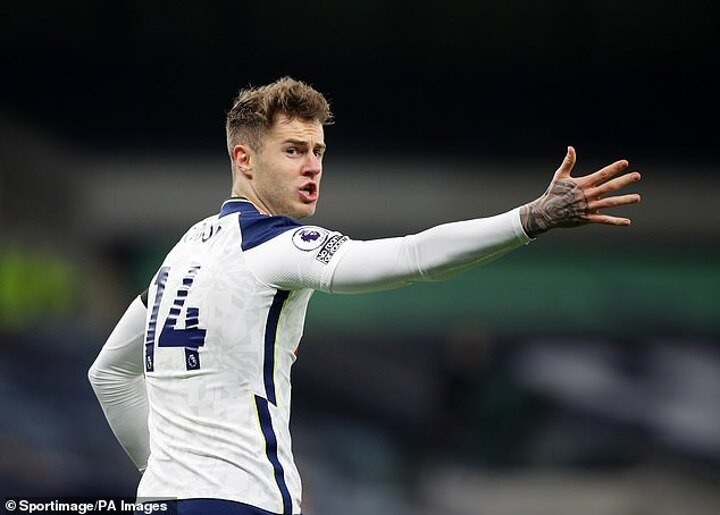 With Toby Alderweireld missing through injury and Davinson Sanchez out of favour with Jose Mourinho, young Joe Rodon will be thrust into the limelight at Stamford Bridge on Sunday as Tottenham face Chelsea in a top-of-the-table London derby clash.

Even without fans, it should be quite the baptism of fire for 23-year-old Rodon, who has played barely 10 minutes in a Spurs shirt since his £11million move from Swansea last month on a five-year contract.

Rodon's move came too late in the transfer window for him to be registered in Spurs' Europa League squad, though that may have been a blessing in disguise because events in that competition have conspired to give him his chance on Sunday.

Before Thursday night's 4-0 Europa League win over Ludogorets, Sanchez - who started the season as first-choice centre back for Mourinho - had not featured in four matches since the embarrassing 1-0 defeat at Royal Antwerp.

So when Alderweireld pulled up injured with Spurs 2-0 up against Manchester City last weekend, it was Rodon who was called upon to help see the game out for the final nine minutes plus stoppage time, which he did without major incident - just as he did against Burnley in a brief cameo for his debut last month.

That it is the Europa League which has shattered Mourinho's opinion of Sanchez brings with it a certain irony, as it was in the final of the competition in 2017, when Manchester United manager, that the Portuguese highlighted the Colombian as an Ajax weakness to exploit because of his rashness in the tackle.

'I won the game minute one,' he was heard reminding Sanchez in the recent Amazon Prime documentary on Tottenham's 2019-20 season.

That perceived weakness did not stop Spurs splashing out a then-club record £42m on Sanchez in the summer of 2017 and, still only 24, he had won Mourinho over enough to be considered first-choice alongside Eric Dier at the start of the season, with Alderweireld on the bench.

Errors against Manchester United and West Ham, however, saw him dropped to the bench, with the Antwerp performance now relegating him to fourth-choice centre back behind Rodon.

So what can Rodon bring that Sanchez doesn't? Well, extra height is one, obvious factor - but a major one still as Mourinho is well known to like his teams to be as big as possible. Rodon stands at 6ft 4in, two inches taller than Dier, Alderweireld and Sanchez, who are all 6ft 2in.

Though Rodon's stature and strength in the air will be major tick for Mourinho - especially if Chelsea start with 6ft 5in Tammy Abraham or 6ft 4in Olivier Giroud up front - it is his reading of the game of the game which made him stand out in the Championship.

While Rodon has the presence to deal with physical challenges, his instinctive understanding of where he needs to be often allows him to get to the ball before the forward has realised what is happening, a la Rio Ferdinand. It is this factor, more than any other, which will have set Rodon apart from Sanchez for Mourinho - who is said to have been very impressed by his performances in training.

Spurs were tracking Rodon for some time, with the defender breaking into the Swansea team in 2018 under Graham Potter and immediately becoming a key player.

With the advantage of being away from the glare of a major club and major city, his rapid rise from having never played a professional game to suddenly being targeted by the Premier League's biggest clubs - Manchester United and City were also interested - was akin to that of fellow Swansea academy graduates Ben Davies, now a team-mate at Spurs, and Joe Allen.

Like Davies and Allen and all those who come through at Swansea, Rodon is very comfortable on the ball. In the Championship with their possession-based style, that meant more often than not striding out from the back after making an interception and laying the ball off to a midfielder or forward, though Rodon would be more than capable of playing the kind of long diagonal balls that Mourinho likes to see from his defenders.

Rodon has been compared in style and stature to John Stones - before his dip in form over the last two years - and it is easy to see why.

As at Swansea, Rodon has swiftly established himself as a key player for Wales and improved them markedly in the process. He only made his debut last year, but was handed the captain's armband on his 10th cap by another Spurs team-mate, Gareth Bale, when he was substituted for the last half an hour of the recent win over Finland, which secured Nations League promotion.

Alderweireld's injury is not as bad as first feared, though if Rodon can put in the sort of performance Mourinho's believes he is capable of against Chelsea to keep Spurs top, he may have a battle on to win his place back.