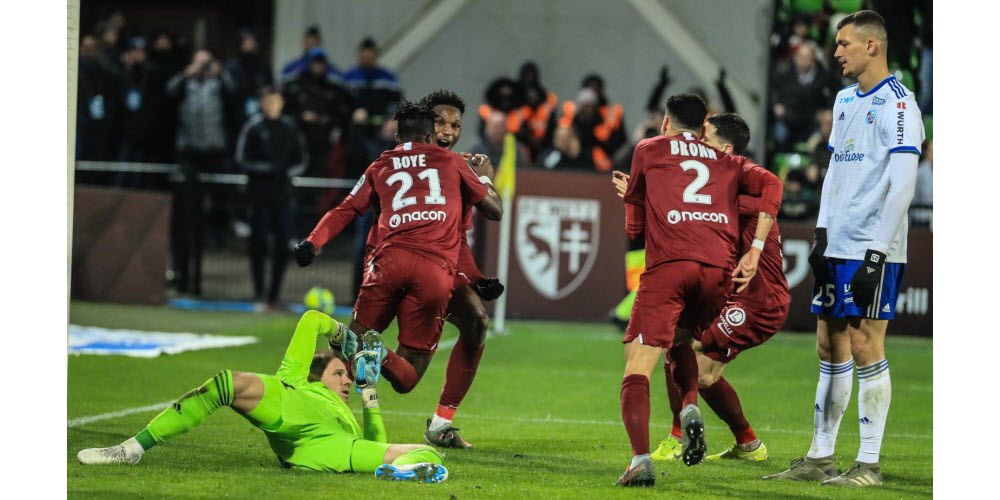 John Boye celerbates his goal in France with Metz

As Europe’s biggest leagues move into the second half of the season, the picture is beginning to take shape at the top of the table. In France, the top four have begun to pull away from the rest of the field in Ligue 1, leaving several teams chasing the prize of European football potentially landing at the doorstep of the team that secures fifth place.

FC Metz, captained by Ghana centre-back John Boye, are one of several teams in the hunt for a European spot next season.

Starting the majority of games, the Black Stars veteran has been a major part of a sudden leap into the top half of the table that has surprised many French football fans following a 15th place finish last season.

Metz, who were relegated and promoted several times in the 2010s and returned to Ligue 1 as recently as 2019, were predicted to struggle again this year but now have fans dreaming of a first European appearance in the 21st century.

While Metz and the rest of the league have been cut adrift from the four-horse title race, now listed as far as 1000/1 to even make the top three in the football betting markets, they still stand an excellent chance to finish at the top of their subsection of the league to take a European position thanks to their stout defensive record. Coach Frédéric Antonetti’s central back three, led by skipper Boye, has provided a solid platform for them to build from and they have proved to be tough to beat.

Under France’s qualification rules, European positions are given to the top four teams in the league and the winner of the Coupe de France.

However, if a top-four team such as Paris Saint-Germain -- who have won five of the last six domestic cups -- were to win the trophy, the European berth would pass down to the team finishing in fifth place in Ligue 1, which Metz occupied as of the beginning of March.

Boye and his Metz teammates have a shot at making history this season, but the competition is fierce in their section of the table. Metz’ rivals for the final European place include teams with a recent continental pedigree such as Marseille and Rennes.

However, if Antonetti’s team can keep up their stingy defence in the second half of the season, they stand a real chance of securing a first European berth since 1999. Much will be asked of 33-year-old Boye, whose experience with the captain’s armband has made Metz tough to beat so far in 2020/21.

Next season will be the inaugural season of the UEFA Europa Conference League, a new third tier of European football taking place beneath the Champions League and Europa League aimed at making continental competiton “more inclusive” to teams from smaller leagues.

It will feature one team from top-tier European nations Spain, England, Germany, Italy and France, at least two teams from nations with a lower UEFA coefficient ranking, and ten teams eliminated from the Europa League play-offs. Therefore, there will be even more opportunities for teams to play in a European competition.

The final will be played at the Air Albania Stadium in Tirana, Albania on 25th May 2022.