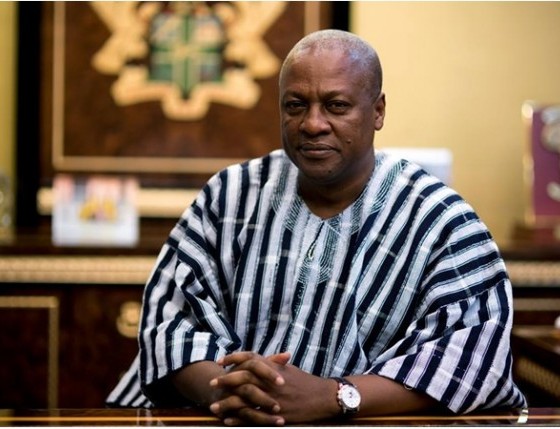 Presidential candidate for the opposition National Democratic Congress (NDC) as made a fresh and big promise designed to woo football fans in the country, claiming his government will fund the participation of Ghanaian clubs in the CAF inter-club competitions.

John Dramani Mahama said the expensive air travel expenditure, that has been blamed for Ghana's lack of good showing in African clubs' competitions, will be paid for by his administration when he wrestles back power from the ruling New Patriotic Party (NPP) in December's general elections.

This is the latest big football push by the NDC to remove the ruling government from office after their promise this week to pay players of the Ghanaian top-flight 1,500 Gh Cedis, in their bid to help players get decent salaries, stay in the league for long and ignite passion in the local game.

Mahama says this combined effort will bring more interest in Ghanaian local game while helping club to win laurels in Africa which is now the preserve of North African clubs who are heavily funded by their governments.

"My government will put in a seed fund and every company that will put in money, we’ll be treated as an expense for them," the former Member of Parliament for Bole-Bamboi made the pronouncement during the Party's second manifesto launch at the Town Hall Meeting at KNUST.

"They can deduct it from their tax as we're keen to develop the sports fund so that it’ll help our sports men and women to be paid well.

"It’s so disheartening when sometimes our clubs don’t have money to pay for their trips to Africa. The Sports Development Fund will help cut off that stress so that they can bring trophies back to Ghana," Mahama deduced.

But supporters of the NPP in the football family say they already pay for clubs who reach the group stage of the international clubs competitions by splashing $200,000 for those playing in the CAF Champions League while $150,000 goes to CAF Confederation Cup teams.

Ghanaian clubs have struggled on the continental stage recently as they struggle to retain their players because of the lure of playing for foreign clubs becasue of poor salaries on the local scene.

Clubs that also manage to qualify for Africa find it difficult raising money to pay for their travel expenses because of the expensive nature of travel within Africa.

This is the big effort by all the political parties in the country to woo football fans who also vote along the lines of governments seen to be sympathic towards the cause of sports in the country.

The NDC, who are the leading opposition Party in the country, launched their manifesto a week ago in which they outlined the welfare packages for athletes, including footballers on the local scene.

According to the manifesto released, the Party will assist the Ghana Football Association to pay each player in the top-flight ₵1,500 a month to ensure the best players are retained in the country.

The NDC have also promised to wrap up the construction of the New Edubiase Sports Stadium, upgrade the Winneba Sports College into a state-of-the-art Sports University with campuses across the country and Build sports recreational facilities in communities in every district.