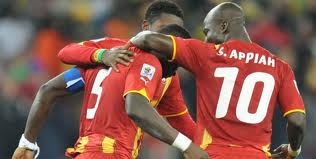 Ghana deputy captain John Mensah has expressed his sorrow at his leader Stephen Appiah's decision to retire from the Black Stars but hailed the contribution of the midfielder to the successes of the national team.

The Italy-based midfielder announced his decision of quitting the national team on Saturday sparking emotions from officials, players and fans of the West African country.

Appiah, who made his debut for the Black Stars in 1996, led his country to qualify for the World Cup for the first time in 2006 and the 2010 tournament in South Africa.

As the captain of the Black Stars, Appiah is seen as the major reason why Ghana qualified for the World Cup for the first time as he united the squad previously plagued by infighting.

Mensah, who is now expected to take over the mantle as the leader of the Black Stars on permanent basis, insists the midfielder's contribution to Ghana football is impressive.

"It is sad to see you retire but I know you have taken it for good reasons," Mensah said in a statement on his personal website after speaking with Appiah about his decision to retire.

"I would like to congratulate my brother, friend, colleague and captain Stephen Appiah for your decision to retire from the national team.

"Your contribution to the making of the current Black Stars team is historic.

"Your commitment to Ghana is unquestionable, your dedication first class and your humility is humbling.

"Appiah your name is written in gold in the history of Ghana Football. God bless you Appiah."

Appiah will go down as one of Ghanaâ€™s all-time greats, having helped the country to qualify for the World Cup for the first time.

And he played a major role during his playing time of the Black Stars as he made 68 appearances and scored 17 goals.

Ghana had been blessed my many talented players in the past including three-time African Player of the YearÂ  Abedi Pele and former Germany Bundesliga top scorer Anthony Yeboah but they could not lead to country to the World Cup.

His inspirational qualities have always been hailed by the Ghana FA and several coaches who have led the Black Stars in recent times.