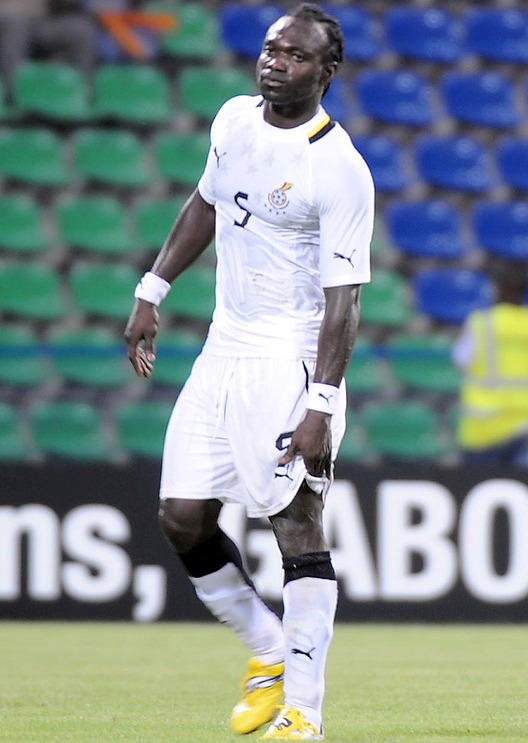 Midway through the second half ofÂ Ghana's 1-0 win over Botswana on Tuesday night, Anthony Annan misjudged a long clearance and inadvertently flicked the ball beyond the defensive line, giving Jerome Ramathlakwane a couple of yards on John Mensah and a run on goal.

Powerful and committed, Mensah is a wonderful defender â€“ Darren Bent may have taken the plaudits for his goals, but when Sunderland dragged themselves out of relegation trouble following their 108-day run without a win the season before last, the form of Mensah and the goalkeeper Craig Gordon were at least as important â€“ but he can be slow on the turn.

Struggling to get back to challenge Ramathlakwane, he bundled him over just outside the penalty area: a foul and a clear red card.

Perhaps there is a qualitative difference between handling a shot on the line and pulling down a forward in his shooting stride â€“ the one prevents a certain goal, the other a certain shot on goal â€“ but it's hard to see a moral difference: both are acts of cynicism aimed at preventing a goal.

It's not as though this were a one-off from Mensah: he did the same in theÂ Africa Cup of NationsÂ quarter-final against Nigeria in 2008. Football being the one-eyed, hypocritical game that it is, and Botswana not being everybody's second favourite team in the way that Ghana were at the World Cup, though, Mensah will probably not face the vilification Luis SuÃ¡rez did after hisÂ save in the World Cup quarter-final.

A sternly worded opinion piece onÂ ghanaweb, linking Mensah's indiscretion to a chain of Ghanaian ill-discipline stretching back to 1992, is probably as bad as it gets.

When Dipsy Selolwane, the Botswana captain who missed the game in Franceville, Gabon, through suspension, spoke of Ghana's "class and professionalism", there was no sense of him speaking with ironic euphemism.

The ethics of goal-denying cheating aside, it must be a worry for Ghana that they got themselves into a position in which they needed their captain to make such a challenge against the 150-1 outsiders.

The first thing to be said is that Botswana are rather better than that: their coach, Stanley Tshosane, an army lieutenant, has his side impeccably well-drilled, but they also have a touch of flair.

For the first quarter of the game, Ghana created nothing. They looked composed and assured on the ball, had a slight swagger about them even, but again and again ran into the five-man curtain Tshosane had erected in front of his back four.

Ofentse Nato, the deepest-lying of the central midfielders, was superb, driving Sulley Muntari â€“ unconvincing as the central of the three creators in Ghana's 4-2-3-1 â€“ deeper and deeper in search of space.

When Ghana did take the lead, after 23 minutes, there was an element of fortune to it, Emmanuel Agyemang-Badu's corner skimming off the head of Asamoah Gyan â€“ a mistimed attempt on goal rather than a deliberate flick, it seemed â€“ and cannoned in off the knee of Mensah. That sort of bad luck, of course, is what a team that set out merely to defend open themselves up to, but still, it was the first meaningful chance of the game.

The expectation was that Botswana would come out, leaving space for Gyan to exploit, but it didn't quite work like that. The Zebras remained cautious, but they did start to pose an attacking threat after half-time. Only an acrobatic clearance from John Boye kept out a Moemedi Moatlhaping header six minutes after the break, after Phenyo Mongala had created a crossing opportunity for Nato with a wonderfully nonchalant backheel â€“ a flick that initially seemed incomprehensible until the midfielder hurtled into view â€“ and by the end, although Ghana weren't exactly hanging on, Botswana seemed the more likely scorers.

Like Ivory Coast before them, Ghana did enough to win, and little more. After the first round of games, it's probably fair to say the two least impressive winners have been the two favourites. The Ghana of Milovan Rajevac and now Goran Stefanovic are a side set up to hit teams on the counter. They sit the midfield deep, try to get the ball up to Gyan, and then have the Ayew brothers and Muntari break on to his layoffs. They are not at their best against opposition as disciplined as Botswana and it may be that when there is less onus on them to take the game to their opponents they will perform better.

But even with that caveat, there must be concerns in the Ghana camp. Gyan is playing only after horse placenta treatment on a calf injury; again, he may improve as the tournament goes on, but on Tuesday he looked a little sluggish. Muntari, frankly, looked cumbersome as the central creator, uncomfortable receiving the ball with his back to goal; Kwadwo Asamoah would seem an obvious replacement, but his status is uncertain after a bizarre controversy over his decision to relinquish the No10 shirt to Dede Ayew (whose father, Abedi Pele, wore it with such distinction in the 90s), complaining it brought too much scrutiny. And it may be that Ghana are missing the drive and goal threat from deep of the retired Kevin-Prince Boateng, who played in a far more withdrawn role for the Black Stars than he does for Milan.

For now, particularly given the sprightly performances of both sides in Mali's slightly fortunate 1-0 win over Guinea (for whom Bobo BaldÃ© remains a one-man demolition squad in the centre of defence), the important thing is to have points on the board â€“ Botswana certainly look good enough to take points elsewhere in the group â€“ but if Ghana really are to lift the title for the first time since 1982, there is need of radical improvement.