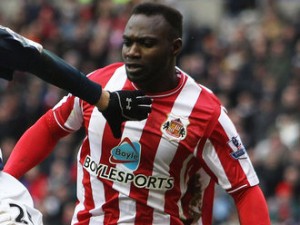 Ghana defender John Mensah could miss next month's opening 2012 African Cup of Nations qualifier against Swaziland because of injury.

His English club Sunderland have confirmed Ghana World Cup captain will be out of action for three weeks after picking up a hamstring injury on the opening weekend of the English Premier League.

The centre-back got injured when he made a last-ditch challenge during the 2-2 draw with Birmingham, damaging his hamstring while stretching for the ball.

Scans have shown up a grade 2 hamstring tear, definitely ruling Mensah out of the trip to West Brom and most likely the game against Colchester.

Itâ€™s thought the injury could rule Mensah out for around three weeks.

If he is ruled out for three weeks he will be unavailable as the Black Stars travel to face Swaziland on 5 September.

In his absence Ghana are likely to rely on the central defensive pair of Jonathan Mensah and Isaac Vorsah.