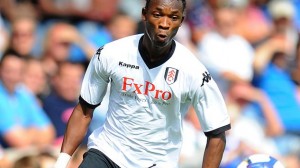 Ghana defender John Paintsil is reported to be on the wish list of Birmingham City, according to the Daily Mirror.

Paintsil has fallen down the pecking order as right back at Fulham since Mark Hughes took charge in the summer.

His contract runs out next summer and has been tipped for a move away from Craven Cottage.

Birmingham boss Alex McLeish could pay Â£ 500,000 for his services.

Paintsil joined Fulham from West Ham in 2008 and played a key role in their Uefa Europa League campaign last season.