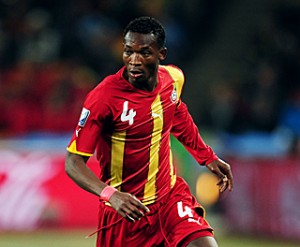 John Pantsil has been handed the Ghana captain's band for the first time in his international career.

The Leicester City man will deputize in the absence of centre-back John Mensah who is injured.

Head coach Goran Stevanovic believes the right-back has the field experience to lead the band of players picked for the tie against Swaziland at the Accra Sports Stadium.

Goalkeeper Richard Kingson could have claimed the captaincy had he been picked.

In June, Sulley Muntari was handed the armband in the friendly against South Korea which they lost 2-1.

Pantsil has been a committed member of the Black Stars since 2002.