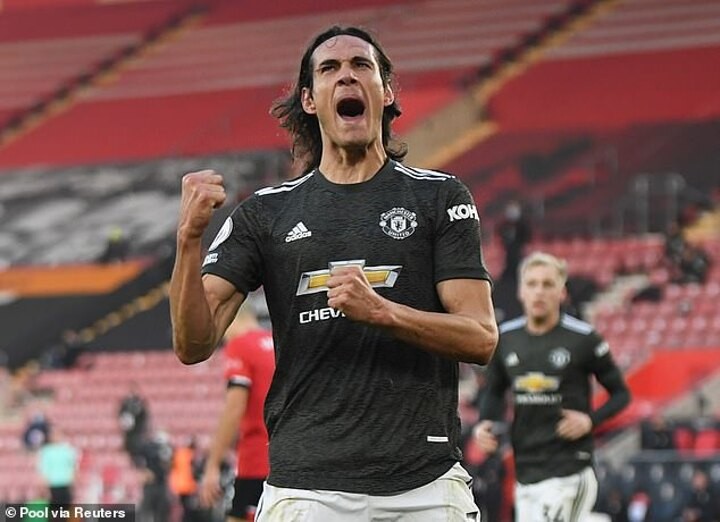 Cavani could face a minimum of a three-game ban from the FA after posting the comment hours after inspiring Manchester United's fightback in the 3-2 win at Southampton on Sunday.

It comes more than a year after Manchester City star Bernardo Silva was handed a one-match ban and fined £50,000 for an offensive tweet sent to club team-mate Benjamin Mendy.

Lescott insists that because the Uruguayan's comment was not a one-off from players, football bodies should come together to educate them about the unacceptable language in England rather than trying to deal with discrimination through individuals.

'I don't think we should allow players to come into the league and use terminology used and deemed OK in their cultures. It's not acceptable here regardless.

'I'm not singling out Cavani – I think we've seen it before. I think Bernardo Silva had an incident as well.

'I think it is an opportunity for the FA, the Premier League, whoever it may be to educate people on arrival of terms and things we can and can't say here, because – I know it is a simpler way of thinking - we don't let foreign players hide behind the fact that they drive on a different side of the road when they arrive here.

'They have to adhere to our laws and I think the kind of ruling in place is not acceptable at the moment. I think as governing bodies they need to look at it, rather than individuals.'

Former United defender Wes Brown added that he believed the comment had 'something to do' with racism but stated that final judgement will have to wait following the FA probe.

'I can't really tell you how people speak to you in South America. I know this has happened a few times now. I don't exactly know what it said, what it regards,' Brown said.

'But I do know he was talking to his mate and it was some sort of, I'm not going to say racist comment, but there was something to do with that, and people will look into it. Sometimes when you are speaking to friends things can get taken out of proportion and we just have to wait to see what happens there.'

The comment overshadowed what had been a stunning substitute performance from the former PSG striker, who set up Bruno Fernandes before netting twice to see his side come from 2-0 down at St Mary's to win.

Brown believes the performance was 'exceptional' and will force Ole Gunnar Solskjaer to consider giving him a starting berth now that he has fully overcome his injury issues.

'He's been at the club for a little bit now and people have probably thought "why has he not played, why has he not started more games than he has"' Brown added.

'If you look at the game at the weekend, I thought he was exceptional really. I think we've not got a striker who is an out-and-out striker.

'Even his last goal at the weekend, the way he attacks the ball, he is always looking to get into that six-yard box, he's always in the right spot. I think the younger lads can all learn a lot from him. We all know about his goalscoring record but he seemed to have a drive about him.

'He still wants to do well, he always gets in the right position. I feel like after the performance at the weekend the manager might have to start him a little bit more now.

'You can see he is fitter than when he first came, obviously he had injuries last season. But the experience he brings, you can't really fault that and that will be needed going forward now in the season.'

BT Sport Monthly Pass lets customers watch all UEFA Champions League fixtures for the next 30 days for a simple fee of £25 with no contract. For more info visit bt.com/monthlypass