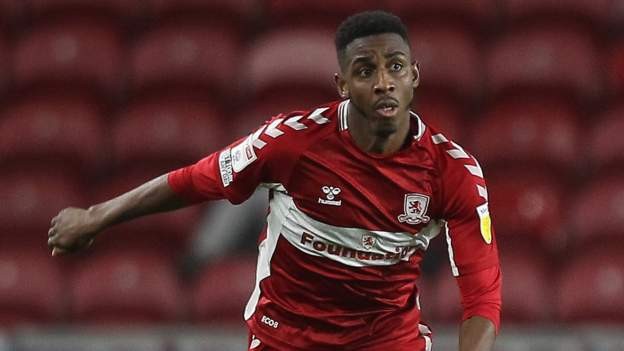 After an uneventful first 25 minutes, the game came to life when Jones beat the offside trap to break clear and calmly beat Ben Hamer to open the scoring.

Swansea rarely threatened in the first half but were much improved after the break, and Joel Piroe thought he had drawn them level only to see Paddy McNair clear his shot off the line.

Victory moves Chris Wilder's Boro above Swansea and up to ninth in the Championship, while back-to-back defeats for the first time this season sees the Swans drop to 12th.

Middlesbrough wasted no time imposing their high pressing style of play, Duncan Watmore closing down Hamer's early clearance in the first minute of the game.

And it was Watmore who had the best chance in the early stages, the striker beating two Swansea midfielders before unleashing an effort from the edge of the box but it went narrowly over.

Chances were at a premium in the first 20 minutes, Ryan Manning's long-range effort Swansea's only effort as Russell Martin's side looked uncharacteristically disorganised out of possession.

And on 26 minutes they were made to pay, former Cardiff City defender Sol Bamba played an inch-perfect through ball to Jones who was in acres of space, and the 22-year-old kept his composure to beat Hamer and break the deadlock.

Boro almost doubled their lead 10 minutes later when Jonny Howson was given time to cross low to the near post, Andraz Sporar flicked the ball on with the outside of his boot and forced a smart reaction save from Hamer.

On the stroke of half time Jamie Paterson broke clear of the Boro defence and went down theatrically in the area, and despite strong appeals from Swansea players, referee Andy Davies instead booked Paterson for simulation.

Unimpressed with the first-half performance, Martin brought on Olivier Ntcham for Korey Smith and the change had the desired impact.

The Swans were much improved in the second half, Matt Grimes firing over from the edge of the box just three minutes after the restart.

Minutes later Piroe rounded goalkeeper Luke Daniels, took a touch before shooting on goal, and while the Swans striker had half-started celebrating McNair got back in the nick of time to clear the shot off the line.

Boro absorbed the pressure well and should have doubled their lead when Watmore dispossessed Ntcham and raced clear, but the former Celtic man recovered from his mistake and got back to block the eventual shot behind for a corner.

The visitors threw everything at it in the closing stages, first Ben Cabango headed a Kyle Naughton cross straight at Daniels before Paterson fired a shot from the edge of the box over.

And with a minute left to play, Naughton caught to Boro defence out and played Piroe through, but the striker's chipped effort went narrowly over the bar as Swansea were left frustrated.

Isaiah Jones (Middlesbrough) wins a free kick in the defensive half.

Uche Ikpeazu (Middlesbrough) wins a free kick in the attacking half.

Attempt missed. Joël Piroe (Swansea City) left footed shot from a difficult angle on the right misses to the left. Assisted by Kyle Naughton with a through ball.

Sol Bamba (Middlesbrough) wins a free kick in the defensive half.

Attempt missed. Olivier Ntcham (Swansea City) left footed shot from outside the box is just a bit too high. Assisted by Ben Cabango.

Kyle Naughton (Swansea City) wins a free kick in the defensive half.

Attempt missed. Jamie Paterson (Swansea City) left footed shot from outside the box is just a bit too high. Assisted by Olivier Ntcham.

Attempt saved. Ben Cabango (Swansea City) header from the centre of the box is saved in the top left corner. Assisted by Kyle Naughton with a cross.